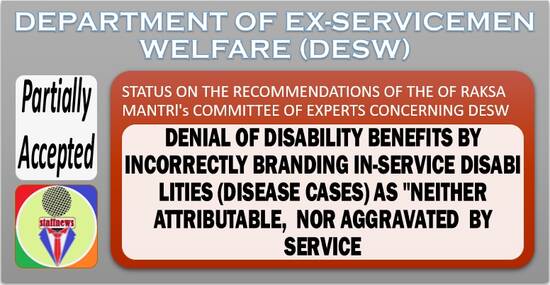 Denial of disability benefits by incorrectly branding in-service disabilities (Disease cases) as “Neither Attributable, Nor aggravated by service”: Recommendations

Denial of disability benefits by incorrectly branding in-service disabilities (Disease cases) as “Neither Attributable, Nor aggravated by service”: Recommendations of the Raksha Mantri’s Committee

2.2.1 DENIAL OF DISABILITY BENEFITS BY INCORRECTLY BRANDING IN-SERVICE DISABILITIES (DISEASE CASES) AS “NEITHER ATTRIBUTABLE, NOR AGGRAVATED BY SERVICE”:

The Expert Committee recommended that:

(a) According to rules, as also endorsed by the Supreme Court1 a benefit of doubt regarding ‘attributability/aggravation’ or ‘service-connection’ needs to be granted to any disability arising during service [See Paragraph 32 of Dharamvir Vs Union of India (supra), Paragraphs 15 & 16 of Union of India Vs Rajbir (supra)]. The same however can be denied when it is shown that the disability is due to a person’s own gross misconduct or negligence, illegal activity, substance abuse or intoxication. The same is also a universally acceptable norm in all democracies [See Rule 105 of US Code 38 (supra)]. The same benefit is also admissible in ‘death’ cases due to in-service disabilities leading to entitlement of Special Family Pension for families. The said proposition is also agreeable to all stakeholders including the medical side with the apex medical body, the MSAC, also on board.

(b) There is no linkage with ‘peace’ or ‘field’ service as far as attributability of disabilities is concerned and any such differentiation locally put across by the office of DGAFMS in the past or professed by any other authority is illegal, contrary to Entitlement Rules, contemptuous towards decisions of the Hon’ble Supreme Court and also against Regulations for Medical Services in the Armed Forces (See Para 33 of Dharamvir Singh Vs Union of India and Regulation 423 of RMSAF). So for example, if a soldier develops Heart Disease while in service, the benefit of doubt needs to be extended to ‘service-connection’ and the claim need not be rejected on grounds such as ‘served in peace area’ or ’cause unknown’. The claim can only be rejected in case of a note of disability at the time of entry into service or reasons such as ‘heavy smoking’ or ‘lack of dietary control leading to obesity and heart disease’ are recorded, if applicable. Otherwise, the presumption operates in favour of soldiers, as per rules and as held by the Supreme Court.

(c) Broadly blaming domestic reasons for psychiatric disabilities arising during military service is against common knowledge and unethical since domestic reasons are bound to give rise to stress and also to aggravate the same in soldiers because of the very fact that due to military service they remain away from their families most of the year and cannot hence cope up with all familial requirements efficiently by virtue of their being absent from home. Putting the blame on ‘domestic reasons’ not only gives out a message that the organization is simply washing its hands off the responsibility towards such soldiers but also results in denial of pensionary benefits to such affected soldiers and their families. The issue already starids addressed in K Srinivasa Reddy Vs Union of India (supra) and also explained in detail in the preceding paragraphs by us. The said principles and causative factors of stress also stand endorsed by way of DO letters written to Chief Ministers by successive Raksha Mantris, which of course has also not resulted in desirable results and needs renewed efforts.

(d) All concerned agencies should realize that non-grant of “attributability” or “aggravation” on flimsy grounds results in denial of pensionary benefits and consequently denial of a life of basic dignity to disabled soldiers. While it may be just a casual stroke of a pen for a medical board, it may be a question of survival for a soldier or his family. The exercise needs to be undertaken in a common sense oriented, practical, liberal and scientific manner. Guidelines, if any; may not operate in derogation of actual rules and need to move with the times as per global norms , based on scientific studies. The lack of transparency of past amendments in the “Guide to Medical Officers (Military Pensions)” wherein the said amendments do not even carry the footnote of the study or the basis leading to the change/amendment is highly avoidable and so is the tendency not to honestly reproduce· the actual rules in the said guide and eliminating important parts such as the erstwhile Para 47 of the 2002 version which has vanished without trace and without reasoning and the spirit of which needs to be restored. All authorities, including Medical Boards shall decide attributability/aggravation on a case to_case basis as per law laid down by the Supreme Court based on the interpretation of actual rules and ground realities of the inherent stress and strain of military life, rather than the mathematical guidelines of the Guide to Medical Officers or locally issued instructions and DO letters written to medical boards.

(e) Cases of feigning of disabilities where none exist should be dealt with strongly and medical boards should also be extra careful in examining cases where individuals have reported with a medical condition just prior to retirement or release.

(f) The current approach shows that despite clear cut law laid down by the Supreme Court and also the spirit of the rules, there is resistance in accepting the settled legal position based on hypertechnical hairsplitting reasons. The concerned authorities must accept gracefully and with all humility the law laid down by the Apex Court and come to terms to the same since an approach of resistance is not only against law but also at odds with global practices for disabilities incurred during military service.

(g) It is further recommended that henceforth in medical boards, all disabilities arising in service may be broadly dealt with on the anvil of the above practical realities, all appeals pending against such disabled soldiers filed in the Supreme Court be withdrawn immediately and pending or. future litigation in Courts and Tribunals related to past cases of disabled soldiers may be dealt with by Government lawyers in judicial fora on the basis of Supreme Court decisions as above, except in cases of gross misconduct, negligence, substance abuse or intoxication, on a case to case basis.

In respect of Denial of disability benefits by incorrectly branding in service disability (Disease Cases) as “Neither Attributable, Nor Aggravated by Service” case, the Government order dated 29th June 2017 has been issued from D(Pen/ Legal) for implementation of orders of Hon’ble Courts/AFTs in NANA cases. Civil Appeals filed by UOI in the Hon’ble Apex Court in NANA cases have been withdrawn.

Further, DGAFMS was advised vide MoD letter dated 28.12.2015 to make it mandatory for Medical Boards/MOs to record reasoned decisions in NANA cases. DGAFMS have amended the existing forms AFMSF-16 accordingly by inserting column regarding justification of the disability/injury assessed as NANA.

Pensionary benefits are granted based on the fulfillment of conditions/circumstances cited in Gol MoD letter dated 31.01.2001 with respect to attributability to or aggravation by military service. No distinction is made between posting in peace area and field. Medical Boards examine the disability of the individual on case to case basis, as per the existing provisions. 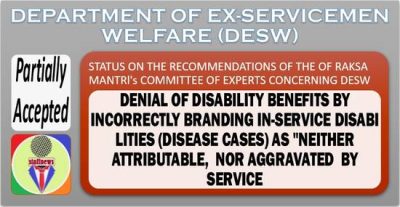 Loading...
Newer Post
Rationalization of Disability benefits for ‘Non-attributable/ non-aggravated cases’ arising out of injuries/death during authorized leave
Older Post
Engagement of Medical Practitioners (CMPs) over and above vacancies till 30.06.2022 or the pandemic continues: Railway Board Order 19.01.2022