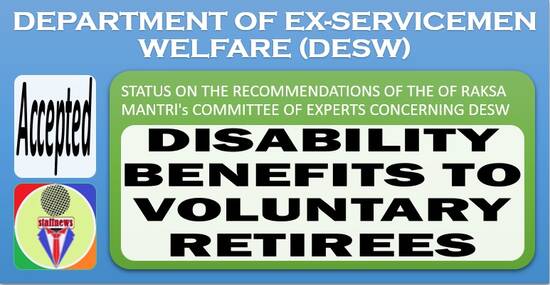 Disability Benefits to Voluntary Retirees: Status on the recommendations of the Raksha Mantri Committee

Disability Benefits to Voluntary Retirees: Status on the recommendations of the Raksha Mantri Committee DEPARTMENT OF EX-SERVICEMEN WELFARE (DESW) S

Disability Benefits to Voluntary Retirees: Status on the recommendations of the Raksha Mantri Committee

2.2.3 DISABILITY BENEFITS TO VOLUNTARY RETIREES : It is hence recommended that disability pension may not be denied to pre-2006 voluntary retirees with the following in the backdrop:

a) The denial itself was based on a false foundation of ‘double benefit’ as also incorrectly projected to the pay commission, but in reality there was no such availability of a ‘double benefit’ as explained above and hence the reason for such prohibition itself is invalid. A disability or a war injury does not cease on voluntary retirement and even otherwise the cut-off date now stands struck down and the striking down has been upheld by the Hon’ble Supreme Court. It is even otherwise discriminatory The Department of Pension and Pensioners’ Welfare has extended the benefit of Constant Attendance Allowance (CAA) to pre-2006 as well as post·2006 eligible civilian disabled retirees but with financial effect from 01-01·2006, hence it is not logical for the DESW to alone deny benefits based on such artificial cut off dates. The pain and agony caused by an injury prior to 2006 or after 2006 is the same.

(b) It is recommended that till the time the policy is comprehensively revised, all appeals filed in the Supreme Court on the said point by the MoD may be withdrawn, no fresh appeals be filed and pending litigation in various Tribunals be conceded on a case to case basis.

Policy has been revised and Government order for grant of Disability Element to Armed Forces Personnel who were retained in service despite disability attributable to or aggravated by Military Service and subsequently proceeded on premature/voluntary retirement prior to 1.1.2006, has been issued vide MoD letter No. 16(05)/2008/ D(Pen/ Pol) dated 19.5.2017. [Click to view] 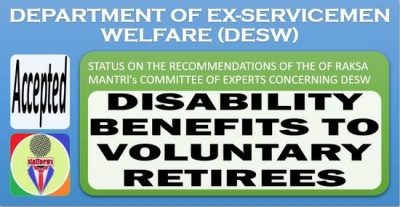