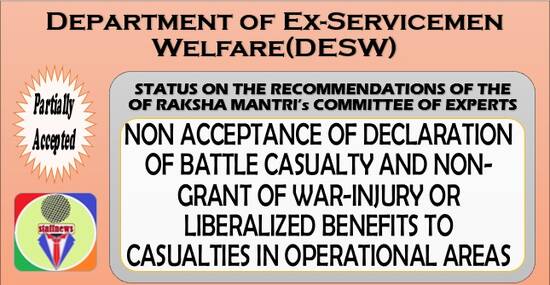 Non acceptance of declaration of Battle Casualty and non-grant of War Injury or Liberalized Benefits : Status on the recommendations of the Raksha Mantri Committee

Non acceptance of declaration of Battle Casualty and non-grant of War Injury or Liberalized Benefits to Casualties in operational areas: Status on the

Non acceptance of declaration of Battle Casualty and non-grant of War Injury or Liberalized Benefits to Casualties in operational areas: Status on the recommendations of the Raksha Mantri Committee

2.2.15 NON ACCEPTANCE OF DECLARATION OF BATTLE CASUALTY AND NON-GRANT OF WAR-INJURY OR LIBERALIZED BENEFITS TO CASUALTIES IN OPERATIONAL AREAS:

The Committee thus recommends that in terms of the very liberal nature of applicable policy and decisions of Constitutional Courts, the deaths and disabilities arising in notified operations may continue to be granted disability and liberalized pensionary awards without hyper- technically insisting on hairsplitting requirements that do not actually exist in the rules. It is further recommended that the Services HQ may continue awarding ‘battle casualty’ status to their personnel under their own instructions since the status of ‘battle casualty’ is not just restricted to pensionary awards but encompasses many other issues such benefits and grants from welfare funds, ex-gratia by States, posting and cadre management etc.

The Committee also recommends that all such cases taken up by the Services HQ and pending with the Defence Accounts Department for release of benefits may be cleared within a period of 4 months by intervention of the MoD so as not to prolong the agony of the affected disabled soldiers or the affected military widows and all necessary amendments in service record and pensionary documents be carried out consequently. Deaths and disabilities occurring in Operation Falcon must also be covered under the same terms and conditions as under other notified operations and if need be, the said operation may be declared as equal to other notified operations for financial benefits.

As per existing Rule positions, the pensionary benefits of Armed Forces Personnel are granted based on the fulfillment of conditions/circumstances cited in GoI MoD letter dated 31.01.2001 with respect to attributability to or aggravation by military service.

Govt. orders dated 07.03.2018 for inclusion of accidental death/injury due to natural calamities while performing in operational duties/movement during deployment on LAC under category D of Para 1 Clause (iii) of MoD letter dated 03.02.2011 making them eligible for LFP has been issued.

As regards notifying Operation Falcon, the matter was considered by G-Wing of MoD and was not agreed to in view of the following reasons:

(a) Border management is the primary role of Army. Forward deployment to safeguard border cannot be treated at par with mobilization for war or war like situation.
(b) This will set a wrong precedent and have far reaching financial implications in all such case of mobilizations as there would be similar proposals for declaration.
(c) It will also open up large number of old case of compensation on account of death/injury in last 27 years and in future.
(d) Troops deployed in the proposed operation area are already drawing field service allowance as applicable and benefits of liberalized pension and ex-gratia payment as per the definition of death and disability.
(e) Higher compensation along the Indo-China border as accorded to troops deployed along LC is not justified as war like situation prevails along the LC as compared to the LAC..