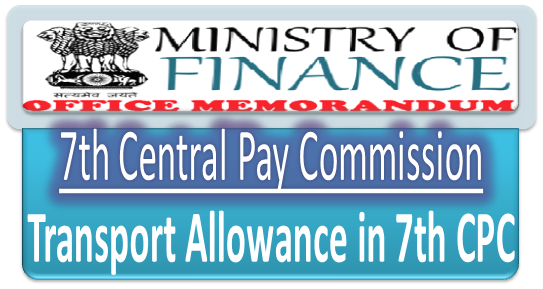 Sub: Drawing Transport Allowance in r/o Officers who are drawing pay in Levels 14 and above of 7 CPC — reg.

With reference to the subject cited above, it is intimated that monthly Transport Allowance is being drawn by some of the officers, who are drawing pay in Levels 14 and above in the 7 CPC pay matrix and who are entitled to the use of official car. But, as per para (iv) of the OM mentioned under reference –

(iv) Officers drawing pay in Levels 14 and above in the Pay Matrix, who are entitled to the use of official car in terms of Department of Expenditure’s O.M. No.20(5)-E.II(A)/93 dated 28.01.1994, shall be given the option to avail the official car facility or to draw Transport Allowance at the rates of Rs.15,750/- p.m. plus Dearness Allowance thereon. Before, allowing Transport Allowance @ Rs.15,750/- plus D.A. thereon, the option exercised by an officer will be examined by the administrative Ministry and his/her entitlement to the use of official car in terms of the O.M. dated 28.01.1994 ibid will require to be certified by the competent authority. In case, an officer opts to draw Transport Allowance @Rs.15,750/- p.m. plus D.A. thereon, he/she will not be allowed to change his/her option during the remaining period of his/her current assignment.

In this regard, it is intimated that necessary certificate may be obtained in r/o the officers who are working under the jurisdiction of your office and copies of the same may please be forwarded to this office for further necessary action while processing the salary bills.