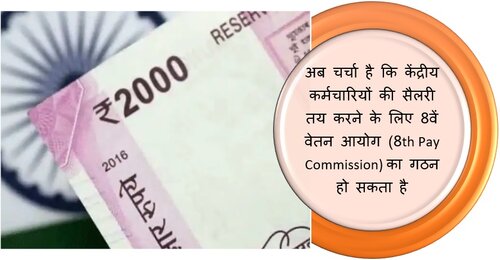 The demand for the formation of the 7th Pay Commission was raised since 2012. Hence, it is the high time to demand the Central Government to set up the 8th Pay Commission to revise pay and allowances.

The 7th pay commission took 18 months to submit its reports

On 25 September 2013, the then Finance Minister P Chidambaram announced that Prime Minister Manmohan Singh has approved the constitution of the 7th Pay Commission.

Seventh Pay Commission, was set up on 8th February 2014. Justice Ashok Kumar mathur was the Chairman for the 7th Central pay Commission. The Commission submitted its report on 19th November 2015 and the recommendations came into effect from 1st January 2016.The order for Implementation of 7th CPC recommendation was issued on 25th July 2016

The Sixth Pay Commission, headed by justice B.N. Srikrishna, was constituted on 5th October 2006. It submitted its report on 24 March 2008, but its recommendations were implemented retrospectively from 1 January 2006. Due to that delay implementation, Central Government had to pay arrears for revising the pay with effect from 1.1.2006. Lot of Clarifications were sought by Ministries and Departments in respect of Pay Revision, Pay Fixation on Promotion, Stepping up of Pay and Allowances. Anomaly committee was also formed to remove the anomalies in Pay related issues.

So, to avoid all these confusions, Central Government has to come forward to set up 8th Pay Commission well in advance to implement the Pay commission recommendation with effect from 1.1.2026 prospectively.

Usually the pay commissions in the past took more than 18 months time to submit their report. A call for constitution of 8th pay Commission will take around 8 to 10 months time to materialise. If this demand is agreed by the Government, it will take another six to 8 months for making announcement and formation of Pay Commission.

Let us hope that trade Unions and Central Government employees associations will take a call on this matter and act wisely.

Loading...
Newer Post
Drawing Transport Allowance in r/o Officers who are drawing pay in Levels 14 and above of 7 CPC: Clarification
Older Post
Review of cost of Housekeeping of Trains & Stations – Clarification