Productivity Linked Bonus to the employees Ordnance Factories, DGQA & DGAQA for the year 2021-22: BPMS writes to The Secretary, Department of Defence Production for timely payment.

Bharatiya Pratiraksha Mazdoor Sangh
(AN ALL INDIA FEDERATION OF DEFENCE WORKERS)
(AN INDUSTRIAL UNIT OF B.M.S)
(RECOGNISED BY MINISTRY OF DEFENCE, GOVT. OF INDIA)

Subject: Payment of Productivity Linked Bonus to the employees Ordnance Factories, DGQA & DGAQA for the year 2021-22.

With due regards, your kind attention is invited to the assurances made by higher authorities of Ministry of Defence to the recognised federations of Civilian employees of MoD that the service conditions of employees, who are on deemed deputation for a period of two years in newly incorporated DPSUs, will not be changed and they will be given better options of service conditions in new scenario.

But, those assurances are proving daydreaming at this budding stage. The PLB has always been declared and disbursed before Dussehra festival to the employees of Ordnance Factories, DGQA & DGAQA. But at this time, there is no decision taken on the matter for these employees.

It has come to notice of the federation that DOO has made a proposal for approval of the Ministry only for first six months of previous year i.e. pre-corporatisation period. But for later period of the year, no proposal/ decision has been communicated either by Govt or by the Corporations. There is unrest amongst employees over the issue.

Therefore, you are requested to look into the matter and do the needful to ensure timely payment of PLB, as per existing formula, to the employees of Ordnance Factories, DGQA, DGAQA for the year 2021-22. 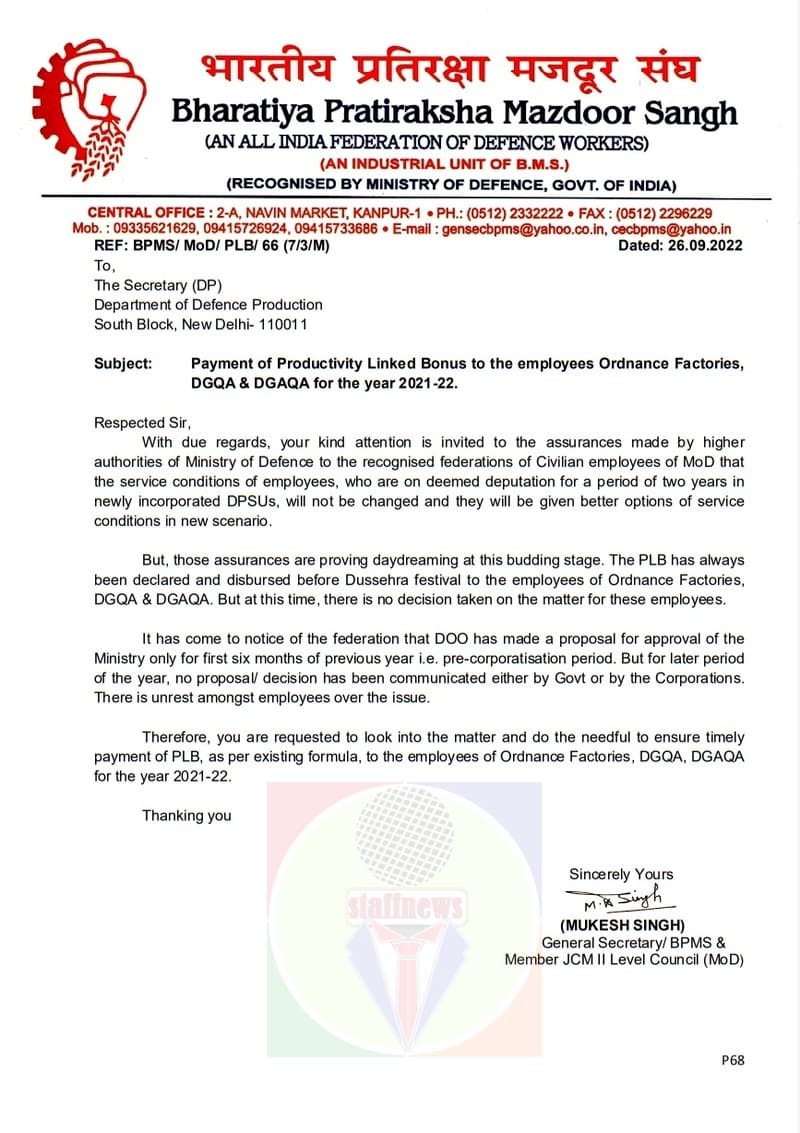