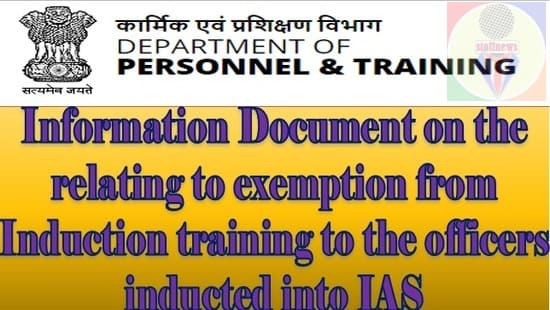 Information Document on the relating to exemption from Induction training to the officers inducted into IAS – regarding.

This Department has issued various instructions from time to time relating to exemption from Induction training to the officers inducted into IAS Service, an effort has been made to consolidate the said instructions at one place and the same may be summarized for better understanding and guidance as under:

2. As per Rule 5(2) of Indian Administrative Service (Probation) Rules, 1954 “a probationer referred to in sub-rule (2) of rule 3, shall not be confirmed in the Indian Administrative Service, if he/she does not undergo such training in the Academy or in the State training institution in any other recognised training institution in the country for such period as the Central Government may consider necessary within the period of probation or the extended period of probation, as the case may be.”

3. In this context, induction training is to be provided to all officers promoted from State Civil Services to Indian Administrative Service immediately on induction and in any case, not later than one year after induction except in such cases where probation has been extended as per rules.

4. In terms of proviso to Rule 5 (2) of IAS (probation), Rules, 1954 as amended from time to time, a probationer who has less than four years of service for retirement on superannuation at the time of his induction into IAS or has undergone mid-career training programme category III after induction, may not be nominated for Induction Training.

5. The officers inducted into IAS with less than one year of service as on 01.07.2016 are exempted from the requirement of undergoing induction training. 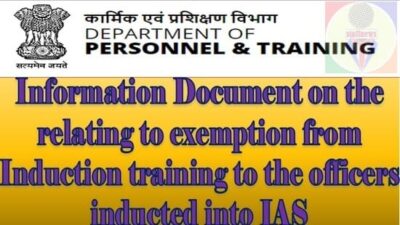