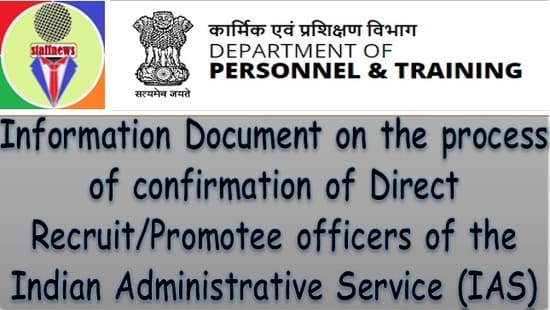 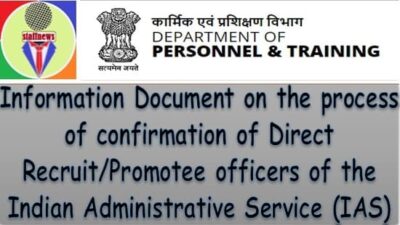 Information Document on the process of confirmation of Direct Recruit/Promotee officers of the Indian Administrative Service (IAS)-reg.

This Department has issued various instructions from time to time regarding Streamlining of the process of confirmation of Direct Recruit officers of the Indian Administrative Service, an effort has been made to consolidate the said instructions at one place and the same may be summarized for better understanding and guidance under:

The following instructions covering various aspects relating to the probation and training of probationers have been issued for the guidance of the State Governments: –

(i) A person is appointed on probation in order to assess his suitability for absorption in the Service to which he has been Probation should not, therefore, be treated as a mere formality. The powers under rule 12 of the Indian Administrative Service (Probation) Rules, 1954, to discharge probationers should be used systematically and vigorously so that necessity of dispensing with the services of the members of the Service at late stages may arise only rarely. A probationer who is found not to possess the basic qualities of character and ability essential in a member of the Indian Administrative Service should be discharged early from the service. There is little to be gained by continuing such a probationer in service for long. It would also not be fair to the probationer himself.

(ii) It is not desirable that a member of the Service should be kept on probation for years as happens occasionally at Save for exceptional reasons, the period of probation should not, therefore, be extended by more than one year and no member of the Service should by convention, be kept on probation for more than double the normal period, that is four years. Accordingly, a probationer, who does not complete the probationer’s final examination within a period of four years , should ordinarily be discharged from the service.

(iii) The decision whether a member of Service should be confirmed or the period of his probation should be extended should be taken soon after the expiry of the initial probationary period, that is, ordinarily within six to eight weeks thereof , and communicated to him together with the reasons in case of extension. With a view to enabling the Central Government to take a prompt decision in each case, the assessment report in the prescribed form, covering the period of practical training in the State should be sent to the Department of Personnel and Administrative Reform immediately after the training is over.

(iv) A probationer, who is not making satisfactory progress or who shows himself to be inadequate for the Service, in any way, should be informed of his shortcomings well before the expiry of the original probationary period so that he can make special efforts at self­ This can be done by giving him a written warning to the effect that his general performance has not been such as to justify his confirmation in the Service and that, unless he showed substantial improvement within a specified period, the question of discharging him from the Service would have to be considered. Even though this is not required by the rules, discharge from the Service being a severe, final and irrevocable step, the probationer should be given such an opportunity before taking the drastic step of discharge.

(v) In order to make the practical training of the probationers really purposeful, it is essential that the probationers are posted as far as possible both to rural and urban districts so that they get variety of experience on land tenures, agricultural practices, departmental programmes as well as problems relating to law and order, industrial unrest and welfare.

It should be ensured that the probationers take the training seriously . They should be discouraged from taking long spells of leave, except for unavoidable reasons, as this would affect their training.

4. The confirmation of the probationers should be based on the assessment of the record of the probationers during the period of training undergone in the Failure to pass Departmental Examination may well be an indication of the generally unsatisfactory nature of the officer’s work during probation and may be taken into account as such. It should not, however, in the opinion of the Government of India operate automatically as a bar against such confirmation . It is the general assessment of the entire record, and not merely success or failure at the Departmental Examination that should count in this respect.

5. The delay in confirmation of probationers results in non-drawal of increments on due dates and hence State Governments should endeavor to forward the assessment reports of the probationers with their recommendations preferably within six weeks after the last date of the probationary It has also been found that the proposals for confirmation from the respective State cadres are not received in time or received incomplete. The shortcomings generally noticed in the proposals include incomplete assessment reports, non-receipt of the recommendation of the Review Board, Course Completion Certificate of Training, vigilance status etc. As a result, the Central Government has not been able to issue the order of confirmation of many IAS probationers in time.

6. In order to avoid this situation, it has been decided that the Lal Bahadur Shastri National Academy of Administration (LBSNAA), Musoorie will have the responsibility of compilation of all information/documents pertaining to probation in cases of Direct Recruit IAS Officers in consultation with the concerned State Governments and of sending the proposal for confirmation to the Central Government as per the proforma prescribed in this regard (Annexure-I). It has also been decided that:

(b) The Department of Personnel and Training (AIS Division) shall obtain the report on verification of character and antecedents of the probationers from the concerned District Collectors within 3 months of If the concerned District Collectors do not give the report in three months, it would be assumed that there is nothing adverse against the concerned probationer. The report in this regard will be provided to the LBSNAA by the AIS Division within a period of 6 months from the joining of the probationers for training. In the absence of such report, it will be presumed that there is nothing adverse against the probationers.

(f) The information received from the LBSNAA in respect of Direct Recruit IAS officers, apart from vigilance clearance, shall be the basis for their confirmation in the IAS. Vigilance clearance shall be required separately from the State Government in cases where the probationer is working in the State during the extended period of probation.

7. In the cases of promotee IAS officers , the respective State Governments shall furnish the assessment reports along with the vigilance clearance, undertaking from the officers to terminate his/her lien from the State Service, marital status within six weeks of the due date of completion of probation in the enclosed proforma (Annexure-II). The report shall clearly indicate whether or not the probationer is fit for confirmation and if not found fit, the period up to which the probation is to be extended . In order to provide the facilities for training to the promotee IAS officers, the concerned Administrative Training Institutes of the State Governments may work out the modalities in consultation with the LBSNAA.

Procedure to be followed in case of extension of probation

8. In the cases where , a probationer fails to complete requisite training during probation period, if LBSNAA or the State Government, feel that a probationer deserves to be given further chance so as to improve his performance, they shall specifically mention this in their recommendation and make suggestions regarding the period up to which the probation is to be extended as laid down in the On receipt of the proposal from LBSNAA, DoPT will take necessary action for extending the probation period.

10. These instructions may please be brought to the notice of the all concerned authorities, including the District Collectors.

(b) Unsatisfactory (Detailed reasons may please be
mentioned)

(a) Vigilance Status from the State Government

(ii) Not Clear(Detailed reasons may please be mentioned)

(b) Verification of Report of Character and antecedent

(Signature of the Director LBSNAA)

Recommendations of the Director, LBSNAA

1) The Probationer is fit for confirmation:

(Signature of the Director, LBSNAA)

CHECK LIST FOR THE INFORMATION / DOCUMENTS TO BE SENT WITH THE PROPOSAL FOR CONFIRMATION OF PROMOTEE OFFICERS IN THE IAS.

Name of the State :

Loading...
Newer Post
Recovery of wrongful/excess payments- DoP&T instructs for audit of pay fixation i.r.o. employee due to retire within next 4 years
Older Post
Exemption from Induction training to the officers inducted into IAS – Information Document