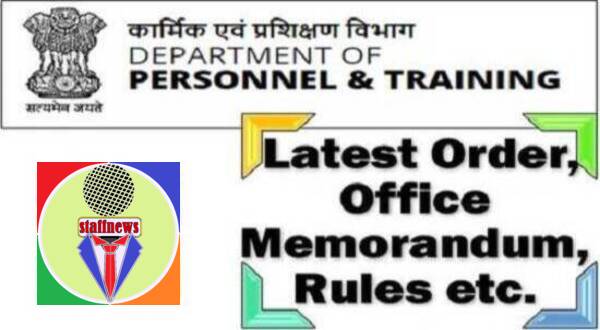 Instructions have been issued from time to time to ensure uniformity in service conditions among Indian Administrative Service (IAS) officers across the cadres and also, to bring in enabling provisions for management of cadre in a rational and efficient way. Various provisions contained in the IAS (Cadre) Rules, IAS (Pay) Rules and Promotion Guidelines are integral part of such measures and they are to be followed by all the State Cadres.However, often it comes to the notice of this Department that certain provisions of IAS (Cadre) Rules, IAS (Pay) Rules and Promotion Guidelines are not being adhered to by the respective State Governments / UTs. Non-observance of such Rules / clarifications is leading to differential treatment to the Members of Service across different cadres, which in turn create legal implications.

2. In order to bring clarity to the existing instructions and enable uniform implementation, an effort has been made to review, consolidate and reiterate the following instructions / guidelines issued so far on thesematters at one place:

3. In order to avoid any undue challenge to the management of cadre and to maintain uniformity in service, the following issues are being highlighted for attention of the State Governments / UTs:

i) Creation of posts in Deputation Reserve:The Government of India Instruction under Rule 4(1.6) of IAS (Cadre) Rules, 1954 states that “The Deputation Reserve is intended to provide a cushion to the State Government for its temporary and unforeseen demands for manning such ex-cadre posts which are required temporarily for short periods and which do not qualify for inclusion in the IAS cadre”.

Para 9.3 of Government of India decisions under Rule 4 of IAS (Cadre) Rules, 1954 further provides that “There is restriction on the powers of the State Government for the creation of such posts and the number of such posts is not to exceed the number shown against deputation reserve in the Cadre.” However, a few State Governments are creating posts in Deputation Reserve (ex-cadre posts) overriding the extant rules.

ii) Creation of posts at Apex Scale: The Rule 4(2) of IAS (Cadre) Rules, 1954 provides that “State Government concerned may add for a period not exceeding two year (and with the approval of the Central Government for further period not exceeding three years) to a State or Joint Cadre one or more posts carrying duties or responsibilities of a like nature to cadre posts”. The provision indicates that the temporary posts created may be restricted to one or two posts only. This provision, however, cannot be used for creating a post in the Apex Scale. Many State Governments have been using the second proviso to Rule 4(2) of IAS (Cadre) Rules, 1954 for creation of additional ex-cadre posts without adhering to the aforementioned.

iii) Utilization of ex-cadre posts in Apex Scale: Rule 12(7) of IAS (Pay) Rules, 2016 states that “At no time the number of members of the Service appointed to hold posts, other than cadre posts referred to in sub-rule (1) and sub-rule (4), which carry pay of Rs. 225000/ – per mensem and which are reckoned against the State Deputation Reserve, shall except with the prior approval of the Central Government, exceed the number of cadre posts at that level of pay in a State cadre or, as the case may be, in a Joint Cadre”.However, some State Cadres are violating the rule pertaining to utilization of ex-cadre posts at Apex level as well as in other grades of IAS.

iv) Occupancy of cadre posts by a non-cadre officer: The rule position mentioned under proviso 9(1) of IAS (Cadre) Rules, 1954 provides that “A cadre post in a State shall not be filled by a person who is not a cadre officer except in the following case; namely:-

(a) if there is no suitable cadre officer available for filling the vacancy:

Provided further that if it is proposed to continue the person who is not a cadre officer beyond a period of three months, the State Government shall obtain the prior approval of the Central Government for such continuance;

(b) if the vacancy is not likely to last for more than three months:

In addition to the above, provisos 9(2) & 9(3) of IAS (Cadre) Rules, 1954 also provide for certain principles and conditions for filling a cadre post by a person who is not a cadre officer.

The State Governments have posted non-cadre officers to cadre posts without following due procedure as envisaged in IAS (Cadre) Rules, 1954.

v) Seeking prior concurrence to the availability of vacancies before promotion:

“Appointment of a member of the Service in the Level of Selection Grade and above shall be subject to availability of vacancies in these grades and for this purpose, it shall be mandatory upon the State Cadres or the Joint Cadre Authorities, as the case may be, to seek prior concurrence of the Central Government on the number of available vacancies in each grade and any appointments made without obtaining the prior concurrence of Government of India shall be liable for cancellation.”

Irrespective of the explicit provisions available in the Rule 3(2)(ii) of IAS (Pay) Rules, it has been observed that:

Therefore, in adherence to the provisions stated above, the State Governments are required to keep the following aspects in mind:

4. The above listed practices are a departure from the prevailing Rules i.e. Pay Rules and Cadre rules and Guidelines. Accordingly, in view of theabove-mentioned observations, it is advised that all the State Governments /UTs strictly comply with the IAS (Cadre) Rules, 1954, (Pay) Rule, 2016 and Promotion guidelines and instructions issued thereunder, by the Department of Personnel & Training, Government of India, from time to time. In case any action is to be taken in relaxation to these Rules / instructions, prior approval of the Central Government shall be obtained as the power to relax any of the provisions of these Rules rests with the Central Government.