General Provident Fund Interest Rate will be 8.8% with effect from 1st April, 2012

After a couple of month Ministry of Ministry of Finance announced .0.2% increase in General Provident Fund and other similar funds for current financial year 2012-13.  Previously MoF had already published a resolution in Gazette of India vide No.F.NO. 5(1)-B(PD)/2011 dated 19-03-2012 regarding Interest Rates on General Provident Fund (GPF) & Similiar funds, which has been revised to 8.6% (eight point six percent) with effect from 1.12.2011. Now interest rate for GPF and similar funds are as under for different period:

(PUBLISHED IN PART I SECTION OF GAZETTE OF INDIA)
F.No.5(1)-B(PD)/2012
Government of India
Ministry of Finance
(Department of Economic affairs)
New Delhi, the 22nd May, 2012
RESOLUTION
It is announced for general information that during the year 2012-2013, accumulations at the credit of subscribers to the General Provident Fund and other similar funds shall carry interest at the rate of 8.8% (Eight point eight per cent) per annum. This rates will be in force during the financial year beginning on 1.4.2012.

The funds concerned are :-

2.        Ordered that the Resolution be published in Gazette of India. 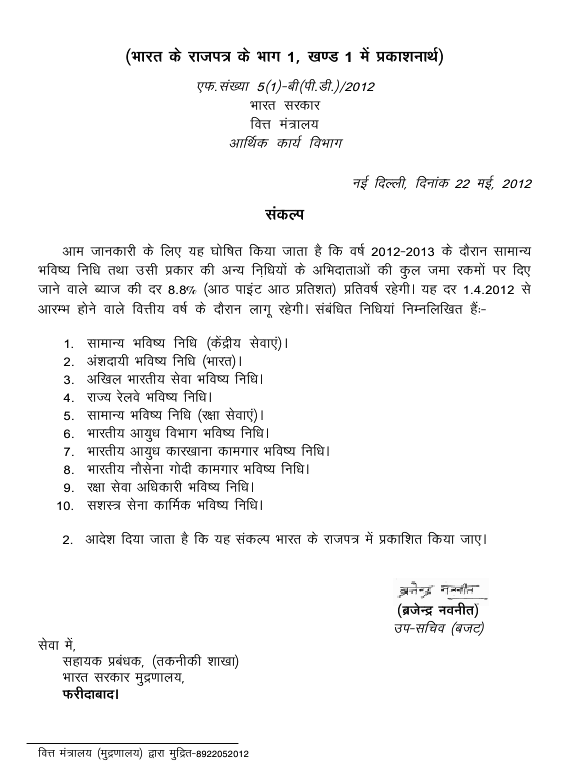