The additional dearness allowance @ 7% from 1st July 2012 for Central Government Employees was  approved by cabinet. The Finance ministry has issued order to grant additional DA from July, 2012 vide his No. 1(8)/2012-E-II(B) dated 28th September, 2012.  Text of said OM are reproduced below:

No. 1(8)/2012-E-II (B) Government of India Ministry of Finance
Department of Expenditure
New Delhi, the 28th September, 2012.
OFFICE MEMORANDUM

The undersigned is directed to refer to this Ministry’s Office Memorandum No. 1(1)/2012-E-II (B)  dated
3rd April, 2012 on the subject mentioned above and to say that the President is pleased to decide that the Dearness Allowance payable to Central Government employees shall be enhanced from the existing rate of 65% to 72% with effect from 1st July, 2012.

3     The additional instalment of Dearness Allowance payable under these orders shall be paid in cash to all Central Government employees.

4     These orders shall also apply to the civilian employees paid from the Defence Services Estimates and the expenditure will be chargeable to the relevant head of the Defence Services Estimates. In regard to Armed Forces personnel and Railway employees separate orders will be issued by the Ministry of Defence and Ministry of Railways, respectively.

5     In so far as the persons serving in the Indian Audit and Accounts Department are concerned, these orders issue in consultation with the Comptroller and Auditor General of India. 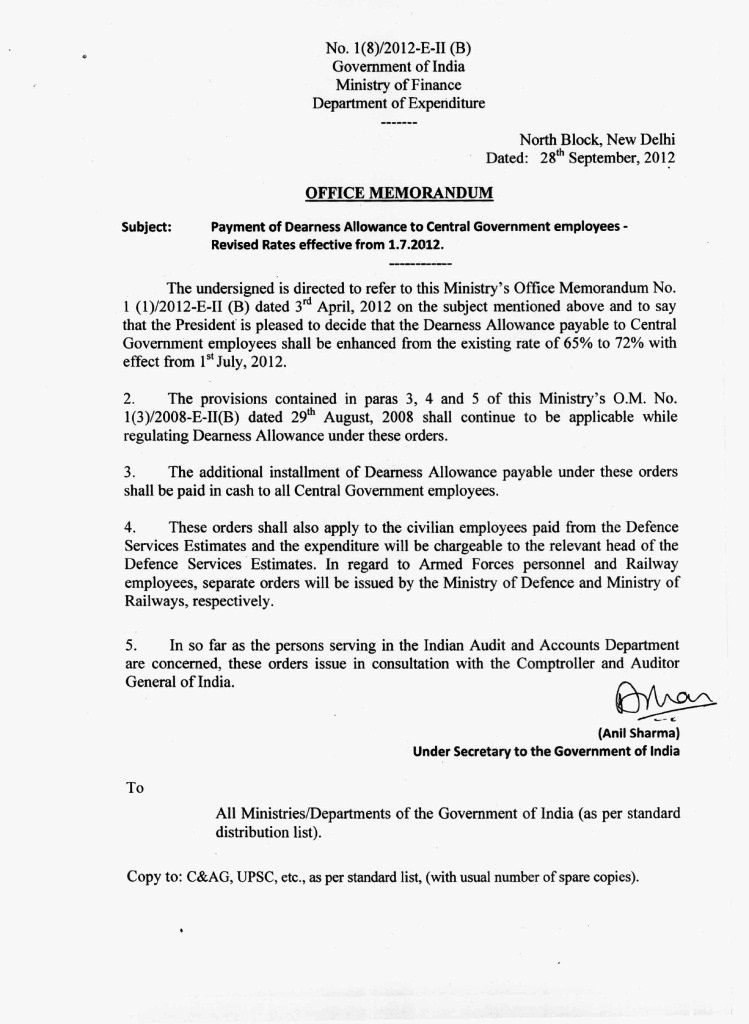