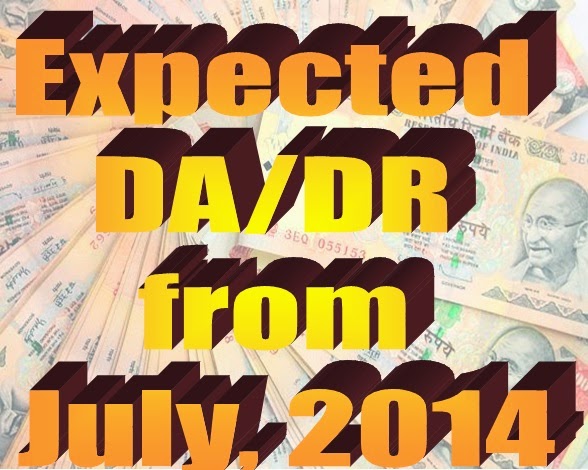 Estimation of Dearness Allowance/Dearness Relief expected from July, 2014 on the basis of
May, 2014 AICPIN is in last step. After

3 points increase in last month All India Consumer Price Index Number [http://labourbureau.nic.in/indtab.html] for Industrial Workers (CPI-IW) on base 2001=100 for the month of
May, 2014 increased by 2 points and pegged at 244 (two hundred and forty Four).
2 points increase in Index has giving now DA/DR may be 107% from July, 2014
with 7% increase.  Only more than 2 point unexpected decline in next months’ AICPIN will
stop DA/DR increase upto 106%.

Expectation of DA/DR for July, 2014 may
analyzed with table is given below:-

The largest upward pressure to the change in current index came from Food group contributing 1.65 percentage points to the total change. At item level,
Rice, Coconut Oil, Fish Fresh, Poultry, Milk, Onion, Vegetables & Fruits, Sugar,
Cigarette, Electricity Charges, etc. are responsible for the increase in index. However,
this increase was restricted to some extent by Petrol putting downward pressure on
the index.

The indices of 35 centres are above and other 41 centres are below national average. The index of Vishakhapathnam and Chandigarh is at par with all-India
index.

The next index of CPHW for the month of June, 2014 will be released on Thursday, 31 July, 2014. The same will also be available on the office website www. labourbureau.gov.in.
(S.S. NEGI)
DIRECTOR