Five major issues of the Central Government employees which are projected for a serving employee to the 7th CPC.

Kiran Kumari 0 July 9, 2015 11:23 am
Five major issues of the Central Government employees which are projected for a serving employee to the 7th CPC. 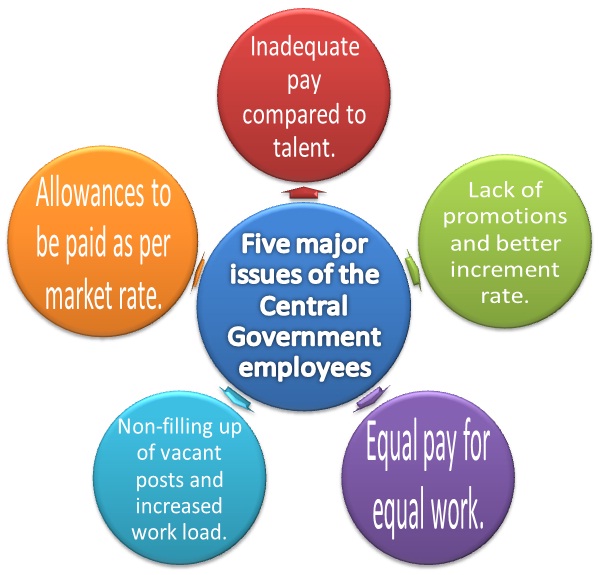 Major issues of the Central Government Employees
1)  Inadequate pay compared to talent.
2)  Lack of promotions and better increment rate.
3)  Equal pay for equal work.
4)  Non-filling up of vacant posts and increased work load.
5)  Allowances to be paid as per market rate.

The person joining a Government Service is not just for the employment is for a whole career, if a person joins a Government Service he will quit/ retire from the job only after putting 30 years service or more.  In case of the person joining a private company he will jump from one company to another at least five times in thirty years.
The talented persons from all over the country are moving to IT, BT and private sectors, rather than Central Government sector. Because of the lower salary / pay structure in Central Government sector compared to IT and BT sectors and complex nature of rules and regulations in Central Government sector and also the skill and merit of the worker/ employee is not into account in Central Government sector.
Today, the weakest link in respect of any government policy is at the delivery stage. This phenomenon is not endemic to India. Internationally also, there is an increasing emphasis on strengthening the delivery lines and decentralization with greater role being assigned at delivery points, which actually determines the benefit that the common citizen is going to derive out of any policy initiative of the government.
More the talented persons are there in Government services, more the delivery of the government schemes will be there, thus the Government machinery will be more effective and common man will benefit a lot.
Main consideration in the private and  public sector being ‘profit’, and in Central Government it is “service” even through Railways, Income Tax & Central Excise are revenue earning departments, hence an equal comparison with the Government is not going to be ever possible. Performance for the Government is usually not measured in terms of profit, but in terms of achieving societal goals.
The time scale gap between one posts to another should be uniform rate from starting to end, starting from Rs 26,000 to Rs 2, 60,000.
The minimum wage should be calculated using Dr Aykroyd formula and following 15th ILC norms and  four units should be taken into account not three units as followed  by the  6th CPC.
The pay should fixed taking in following factors.
a)  The educational qualifications.
b)  The level of responsibility.
c)  The skill of the work.
The earlier pay commissions were only taking into account only educational qualifications into account.
Only around 8 to 9 % of the total Govt revenue collection is spent on wages of Central Government employees, compared to 20% to 25% of the revenue spent on wages in private sector.
The cost of living (prices of essential items and other items) has gone by over 250% during last 10 years, compared to 113% DA. The prices are continuously rising.
The Government is a model employer, hence the wages should be provided with the needs and to attract the talented and skilled persons.

Today there are persons who have not even got two promotions in his entire career, The MACP scheme is not that much effective, lack of promotions in Central Government sector compared to IT and BT sectors.
One should get five promotions in promotional hierarchy during his service to motivate him to work more. As the Government employee put more and more service, he will be more trained to perform his duties in a better befitting manner. Thus the Government is more beneficial as good quality of work can be expected of him.
The family responsibility will increase with age. There should be adequate financial protection for him, the better rate of increment should motivate him to work more from the present 3% to 5%. On promotion one should get a minimum salary increase of Rs 3000/- per month as he will perform higher duties.

For the same post which include similar duties and responsibility. There are different pay scales/ Grade Pay existing for same nature of duties and similar recruit qualifications. This anomaly should be rectified.
Grant of Grade Pay Rs.4800 to all Supervisors cadre.  The gazetted Group “B” post should start from Rs 5400/- GP.

4) Non-filling up of vacant posts and increased work load

5) Allowances to be paid as per market rate:

The house rent allowance should be from Rs 7000/- per month to Rs 55,000/- per month. All allowances  such as Tour DA, OTA, Night Duty, CEA (tuition fees) , Cashier Allowances, etc should be increased by three times.
The all allowances should also be paid net of taxes which has been examined by 5th CPC in para no 167.
The staff side (JCM) has represented well the above important issues of the Central Government Employees before the 7th CPC, we sincerely hope the 7th CPC will address and resolve the above issues.
Let us wait patiently for the 7th CPC to submit its report and then we can deliberate on the report and do the needful action.