Representation from Govt Servant to PM, other higher authorities directly by email or PGPortal is an unbecoming conduct: DoPT

Subject: Representation from Government servant on service matters – reiteration of instructions – regarding.

The undersigned is directed to refer to O.M. of even number dated 6th June, 2013 wherein instructions have been issued on submission of representation by Government servants about their service matters. In spite of these instructions, it has been observed that Government servants including officers/ officials of para military forces and Army personnel continue to represent directly to the Prime Minister, Minister, Secretary (P) and other higher authorities, directly.
2. As per the existing instructions, wherever, in any matter connected with his service rights or conditions, a Government servant wishes to press a claim or to seek redressal of a grievance, the proper course for him is to address his immediate official superior, or Head of his office, or such other authority at the appropriate level who is competent to deal with the matter in the organisation.
3. Such submission of representations directly to other authorities by- passing the prescribed channel of communication, has to be viewed seriously and appropriate disciplinary action should be taken against those who violate these instructions. This can rightly be treated as an unbecoming conduct attracting the provisions of Rule 3 (1) (iii) of the Central Civil Services (Conduct) Rules, 1964. It is clarified that this would include all forms of communication including through e-mails or public grievances portal etc.
4. Attention in this connection is also invited to the provision of Rule 20 of CCS (Conduct) Rules, 1964 prohibiting Government servants from bringing outside influence in respect of matter pertaining to his service matter. Representation by relatives of Government servant is also treated as outside influence as clarified vide MHA OM No. F. 25/21/63-Estt.(A) dated 19.09.1963
5. It is reiterated that these instructions may be brought to the notice of all Govt servants including officers/ officials of para military forces and member of armed forces and action taken against those who violate these instructions.
sd/-
(Mukesh Chaturvedi)
Director (E) 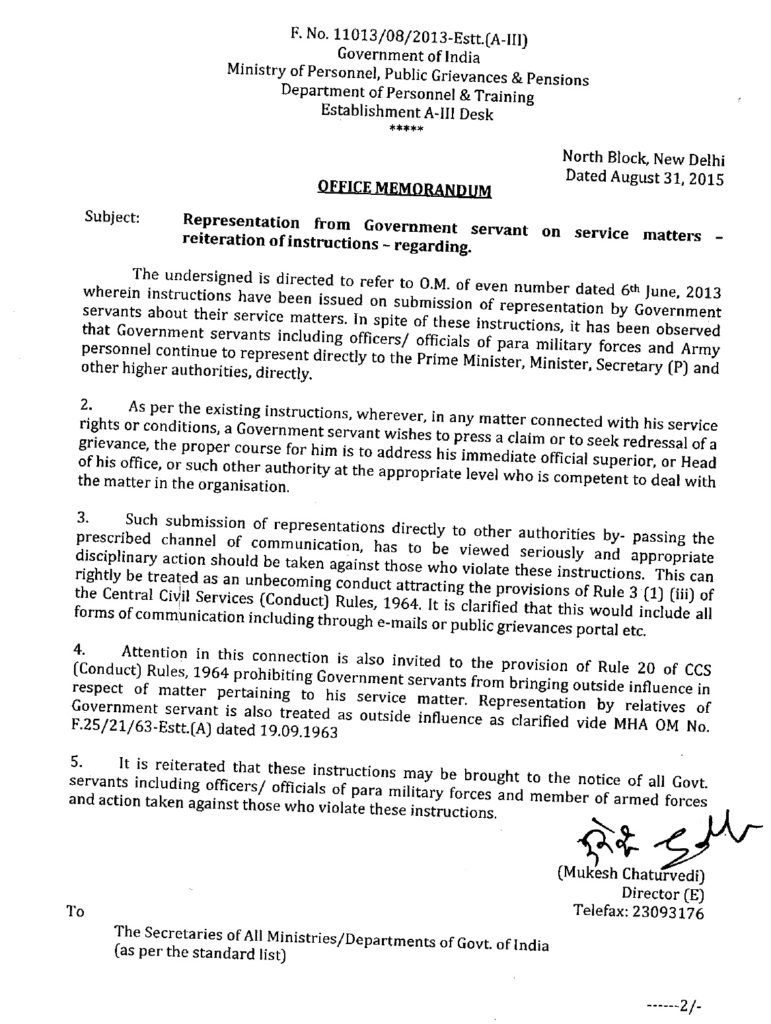