The report of the Seventh Pay Commission (SPC) is set to be released soon. The new pay scales will be applicable to Central government employees with effect from January 2016. Many commentators ask whether we need periodic Pay Commissions that hand out wage increases across the board. They agonise over the havoc that will be wrought on government finances. They want the workforce to be downsized. They would like pay increases to be linked to productivity. These propositions deserve careful scrutiny. The reality is more nuanced.
Critics say we don’t need a Pay Commission every ten years because salaries in government are indexed to inflation. At the lower levels, pay in the government is higher than in the private sector. These criticisms overlook the fact that, at the top-level or what is called the ‘A Grade’, the government competes for the same pool of manpower as the private sector. So do public sector companies and public institutions — banks, public sector enterprises, Indian Institutes of Technology (IITs), Indian Institutes of Management (IIMs) and regulatory bodies — where pay levels are derived from pay in government.
The annual increment in the Central government is 3 per cent. Adding dearness allowance increases of around 5 per cent, we get an annual revision of 8 per cent. This is not good enough, because pay at the top in the private sector has increased exponentially in the post-liberalisation period.

A correct comparison should, of course, be done on the basis of cost to the organisation. We need to add the market value of perquisites to salaries and compare them with packages in the private sector. We cannot and should not aim for parity with the private sector. We may settle for a certain fraction of pay but that fraction must be applied periodically if the public sector is not to lose out in the competition for talent.
True, pay scales at the lower levels of government are higher than those in the private sector. But that is unavoidable given the norm that the ratio of the minimum to maximum pay in government must be within an acceptable band. (The Sixth Pay Commission had set the ratio at 1:12). Higher pay at lower levels of government also reflects shortcomings in the private sector, such as hiring of contract labour and the lack of unionisation. They are not necessarily part of the ‘problem with government’.
Perhaps the strongest criticism of Pay Commission awards is that they play havoc with government finances. At the aggregate level, these concerns are somewhat exaggerated. Pay Commission awards typically tend to disrupt government finances for a couple of years. Thereafter, their impact is digested by the economy. Thus, pay, allowances and pension in Central government climbed from 1.9 per cent of GDP in 2001-02 to 2.3 per cent in 2009-10, following the award of the Sixth Pay Commission. By 2012-13, however, they had declined to 1.8 per cent of GDP.
This happened despite the fact that the government chose to make revisions in pay higher than those recommended by the Sixth Pay Commission.
Today, Central government pay and allowances amount to 1 per cent of GDP. State wages amount to another 4 per cent, making for a total of 5 per cent of GDP. The medium-term expenditure framework recently presented to Parliament looks at an increase in pay of 16 per cent for 2016-17 consequent to the Seventh Pay Commission award. That would amount to an increase of 0.8 per cent of GDP. This is a one-off impact. A more correct way to represent it would be to amortise it over, say, five years. Then, the annual impact on wages would be 0.16 per cent of GDP.
The medium-term fiscal policy statement presented along with the last budget indicates that pensions in 2016-17 would remain at the same level as in 2015-16, namely, 0.7 per cent of GDP. Thus, the cumulative impact of any award is hardly something that should give us insomnia. 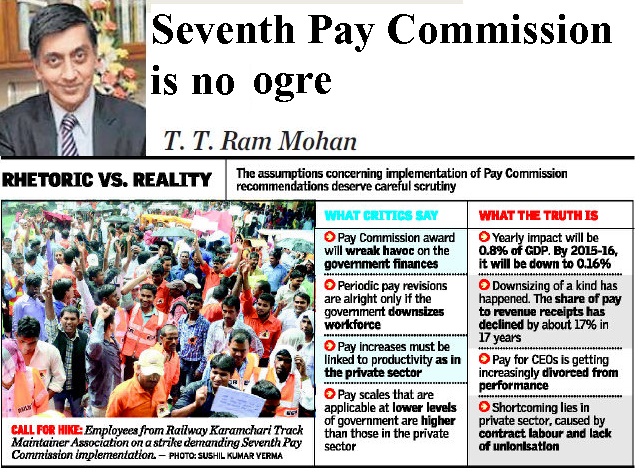 There are a couple of riders to this. First, the government is committed to One Rank, One Pension for the armed forces. This would impose an as yet undefined burden on Central government finances. Second, while the aggregate macroeconomic impact may be bearable, the impact on particular States tends to be destabilising.
The Fourteenth Finance Commission (FFC) estimated that the share of pay and allowances in revenue expenditure of the States varied from 29 per cent to 79 per cent in 2012-13. The corresponding share at the Centre was only 13 per cent. The problem arises because since the time of the Fifth Pay Commission, there has been a trend towards convergence in pay scales. The FFC, therefore, recommended that the Centre should consult the States in drawing up a policy on government wages.

It is often argued that periodic pay revisions would be alright if only the government could bring itself to downsize its workforce — by at least 10 to 15 per cent. From 2013 to 2016, the Central government workforce (excluding defence forces) is estimated to grow from 33.1 lakh to 35.5 lakh. Of the increase of 2.4 lakh, the police alone would account for an increase of 1.2 lakh or 50 per cent. What is required is not so much downsizing as right-sizing — we need more doctors, engineers and teachers.
Downsizing of a sort has happened. The Sixth Pay Commission estimated that the share of pay, allowances and pension of the Central government in revenue receipts came down from 38 per cent in 1998-99 to an average of 24 per cent in 2005-07. Based on the budget figures for 2015-16, this share appears to have declined further to 21 per cent. In financial terms, this amounts to a reduction of 17 percentage points over 17 years or an annual downsizing of 1 per cent. It’s a different matter that it is not downsizing through reduction in numbers of personnel.
It is often said that pay increases in government must be linked to productivity. We are told that this is where government and the private sector differ hugely. However, the notion that private sector pay is always linked to productivity is a myth. In his best-selling book, Capital in the 21st Century, economist Thomas Piketty argues that the explosion in CEO pay in the West has been increasingly divorced from performance. He also argues that the emergence of highly paid “supermanagers” is an important factor driving inequality in the West.
We are seeing a similar phenomenon in the private sector in India. The serious public policy challenge, therefore, is not so much to contain a rise in pay in the public sector as finding ways to rein in pay in the private sector. It is also ironical that people should harp on linking pay to performance in the public sector when high-profile firms in the private sector such as Google and Accenture are turning away from such measurement.
A better idea would be to conduct periodic management audits of government departments on parameters such as cost effectiveness, timeliness and customer satisfaction.
Improving service delivery in government is the key issue. Periodic pay revision and higher pay at lower levels of government relative to the private sector could help this cause provided these are accompanied by other initiatives. The macroeconomic impact is nowhere as severe as it is made out to be. (T.T. Ram Mohan is professor at IIM, Ahmedabad)