Minimum pay under 7th CPC likely to be revised to Rs 20,000; award to come with increment bonanza 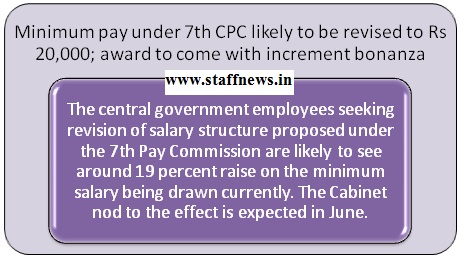 New Delhi: The central government employees seeking revision of salary structure proposed under the 7th Pay Commission are likely to see around 19 percent raise on the minimum salary being drawn currently. The Cabinet nod to the effect is expected in June.

As per reports, the Empowered Committee of Secretaries (CoS)are likely to propose a minimum pay of Rs 20,000. The 7th pay panel report, which was released in November had raised the minimum pay to Rs 18,000 per month from currently drawn Rs 7,000, while the maximum pay was recommended Rs 2.5 lakh per month from Rs 90,000.
The central government unions, seeking the revision in 7th pay panel recommendations have sought the minimum pay of Rs 26,000
As per reports, the 7th CPC award is likely to come with salary increment which was anyway due in the month of July.
The financial burden of the 7th CPC recommendations on the exchequer is expected to be around Rs 1.02 lakh crore in meeting the revised pay structure. The central government has already made provision of Rs 70,000 crore in the Budget 2016-17 to meet the payout of the pay commission award.
Since the minimum pay has been revised upwards, the 7th pay panel has recommended that HRA be paid at the rate of 24 percent, 16 percent and 8 percent of the new Basic Pay for Class X, Y and Z cities respectively.
The Commission also recommended that the rate of HRA will be revised to 27 percent, 18 percent and 9 percent respectively when DA crosses 50 percent, and further revised to 30 percent, 20 percent and 10 percent when DA crosses 100 percent. However, no arrears will be paid on the HRA, and will be effective only when the pay panel award is notified.

Read at: Zee Media
Stay connected with us via Facebook, Google+ or Email Subscription.