Subject: Introduction of single window system for acceptance of proposals for framing/amendment of Recruitment Rules.

2. Further, this Department has also developed an additional feature in the existing on-line system namely Recruitment Rules  Formulation, Amendment & Monitoring System(RRFAMS), which is a web based information system for imparting information regarding_status-of-proposals of_Recruitment Rules received in DoPT. This would enable the Ministries and Departments to get an update on the current status of their proposal relating to framing/amendments of Recruitment Rules referred to DoP&T. A Draft OM to this effect is annexed herewith.
3. Ministries/Departrnents are, therefore, requested to send their comments to [email protected] on the proposed O.M. positively by 27.6.2016.
(G. Jayanthi)
Director (E-1)
***
F.NO.AB-14017/10/2016-Estt.RR(3123439)
Government of India
Ministry of Personnel, Public Grievance and Pensions
Department of Personnel and Training
Establishment-I Division
North Block
New Delhi the 2016.
Office Memorandum

Sub: Introduction of single window system for acceptance of proposals for framing/amendment of recruitment rules.

In order to reduce the time cycle in finalisation of proposal relating to framing/amendment of RRs and to streamline the processes involved, it has been decided that henceforth all proposals for framing/amendment of Recruitment Rules (RRs) will be received under single window system.
2. The proposals shall be submitted under the Single Window System on Tuesdays and Thursdays of every week between 10.00 AM to 12.00 Noon. The concerned Under Secretaries of the Administrative Ministry/Department shall attend a meeting with the officers concerned in RR Division of DoP&T on the
scheduled day and time. In case the concerned Nodal Officers are not attending office, then the link officer will receive the proposals. The Ministries/Departments may ensure that all the points indicated in the checklist are fulfilled. A copy of the checklist is enclosed at Annexure-I. The work allocation of RR Division of this Department among the three Units including contact details is enclosed at Annexure-II.
3. Only those proposals which are fulfilling all the requirements of the checklist will be processed for providing comments/approvals.
4. This Department has developed a Web-Based Information System so as to enable the Ministries and Departments to know the current status of consideration /disposal of proposals relating to framing/amendment of Recruitment Rules and Search-cum-Selection Committee. The Departments are requested to visit the
website of DoP&T for ascertaining the status of consideration of proposal. The meeting, if any, fixed by the Department of Personnel & Training to discuss regarding the proposals will also be informed through the system. The Ministries/Departments may continue to follow all the existing instructions on the subject, including consultation with UPSC and Legislative Department.
(Jayanthi G.)
Director(E.I) 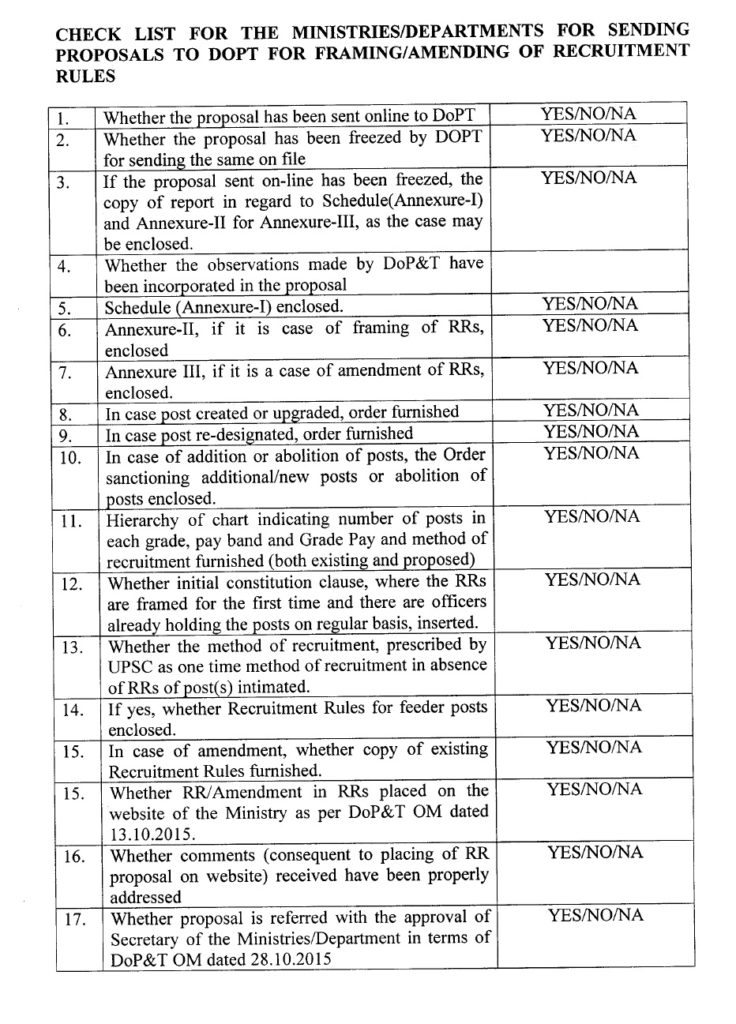