Ref: – Your OM No. 38/37/08-P&PW(A) dated 06.04.2016.
Please refer to your OM No. referred above. In Para-6 of the OM reads as follows:
“It has now been decided that the revised consolidated pension of pre-2006 pensioners shall not be Iowerthan 50% of the minimum of the pay in the pay Band and Grade Pay (wherever applicable) corresponding to the pre-revised pay scale as per fitment table without pro-rata reduction of pension even if they had qualifying service less than 33 years at the time of retirement.”

As per OM No. 38/86/03-P&PW (A) dated 29.08.2008 of Department of Pension and Pensioners welfare, in which the decision to implement the decision of the Govt. on 6th CPC recommendations was communicated, “pension should be paid at 50% of the average emoluments received during the last ten months, or the pay last drawn whichever is more beneficial to the retiring employee.”

The Resolution dated 29.08.2008 contains two decisions (1) delinking of the condition of 33 years and (2) calculation of pension as 50% of the last pay drawn or last ten months average pay whichever is more beneficial to the retiree. I request you to issue necessary modificatory orders to the OM dated 06.04.2016, so that the benefit of “50% of last pay drawn” will be extended to pre-2006 pensioners also. 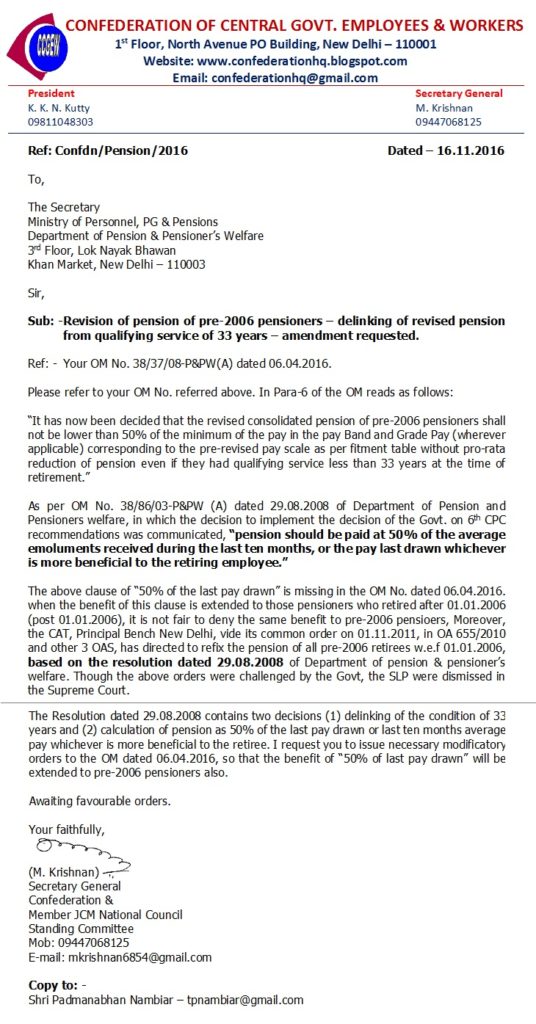