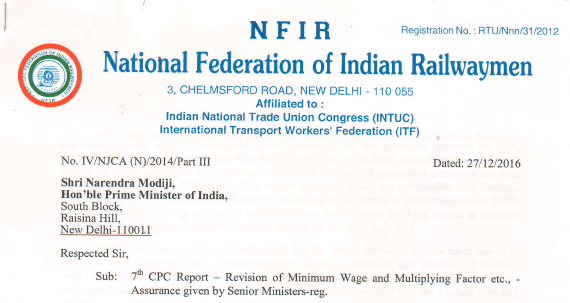 NFIR brings to your kind notice that the National Joint Council of Action (NJCA) —consisting JCM constituent organizations of Central Government employees have deferred the Indefinite Strike action on the assurance of Senior Cabinet Ministers on 30th June 2016 that a High Level Committee will be constituted to consider the demands of JCM (Staff Side) within four months for improving the minimum wage and applying revised multiplier factor for pay fixation in 7th CPC Pay Matrices to the Central Government employees which include over 1.3 million Railway employees.
Pursuant to the assurance of Group of Ministers as mentioned above, the decision to go on indefinite strike by Railway employees has been deferred, hoping that there shall be a negotiated settlement on the Charter of demands already submitted to the Cabinet Secretary by the JCM (Staff Side).
NFIR however expresses its deep sense of disappointment over breach of commitment as more than five months passed from the date of assurance given to the Leaders of JCM (Staff Side) by the Group of Ministers (Hon’ble Finance Minister, Home Minister, Railway Minister and Minister of State for Railways). The Railways specific issues on which agreement was reached between the Railway Board and the Federations have also not been implemented till date.
The Railway employees of all categories are greatly disappointed over non-fulfillment of assurances, consequently, there has been a feeling among Rail workforce that the Government is not sensitive towards resolving their genuine grievances and equally not sincere to honour its commitments.
NFIR also beings to your kind notice that even though the successive Railway Ministers have sent proposals to Finance Minister that Railways should be exempted from National Pension System (NPS) in view of complexities, unique nature of working of Railway employees and their arduous working conditions, the Government has not given its approval till now, resultantly, the Railway employees who had joined from 01/01/2004 are extremely agitated as there is no social security to them and their families in the form of guaranteed pension at par with those appointed prior to 01/01/2004. The unique nature of duties are comparable with Defence Forces Personnel. The death rate of Railway employees in the course of performing duties is 700 per annum and the average number of staff injured on duty is about 3000 per annum as reported by the High Level Safety Review Committee headed by Dr. Anil Kakodkar. NFIR further brings to your kind notice that the Indian Railways has the track record of dedicated working on account of unquestionable loyalty, dedication and devotion of Railway employees to Indian Railways. Most of them perform duties at remote places, jungle areas where minimum living facilities are not available. It needs to be appreciated that not a single man day was lost on employees’ account during the past four decades.
NFIR, therefore, requests your kind intervention in ensuring that the Government implements its commitments on revision of minimum wage and multiplier factor for the Central Government employees which include rail workforce. Federation also requests that other issues which are pending before various Committees constituted by the Government may be got finalized on the basis of submissions made by JCM (Staff Side) before those Committees and also before the Cabinet Secretary. NFIR at the same time requests to kindly arrange to issue appropriate directive for solving Railways’ specific issues through negotiated settlement very soon. Also kind attention of Hon’ble Prime Minister is invited to NFIR’s communication vide letter of even number dated 01/11/2016 and subsequent reference by the PMO to the Secretary, Department of Expenditure (Ministry of Finance) vide PMO ID No. PMOPG//D/2016/0326695 dated 04/11/2016, endorsing copy to the Federation, in this regard.