7th CPC Revised Allowances are given effect from 01.07.2017 and get reflected in the current month’s Salary Bills: Govt of India Press News 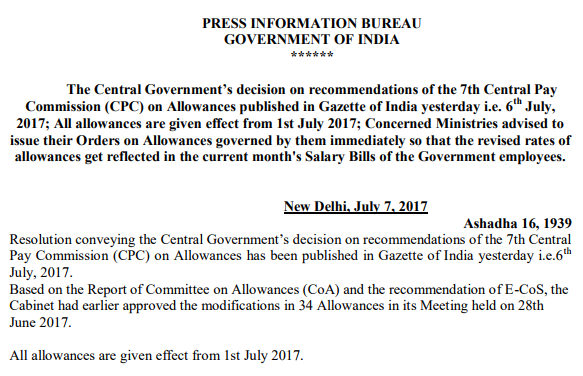 PRESS INFORMATION BUREAU
GOVERNMENT OF INDIA
******
The Central Government’s decision on recommendations of the 7th Central Pay Commission (CPC) on Allowances published in Gazette of India yesterday i.e. 6th July, 2017; All allowances are given effect from 1st July 2017; Concerned Ministries advised to issue their Orders on Allowances governed by them immediately so that the revised rates of allowances get reflected in the current month’s Salary Bills of the Government employees.

New Delhi, July 7, 2017
Ashadha 16, 1939
Resolution conveying the Central Government’s decision on recommendations of the 7th Central Pay Commission (CPC) on Allowances has been published in Gazette of India yesterday i.e.6th July, 2017.
Based on the Report of Committee on Allowances (CoA) and the recommendation of E-CoS, the Cabinet had earlier approved the modifications in 34 Allowances in its Meeting held on 28th June 2017.
All allowances are given effect from 1st July 2017.
Concerned Ministries have now been advised to issue their Orders on Allowances governed by them immediately so that the revised rates of allowances get reflected in the current month’s Salary Bills of the Government employees.
Highlights of the Allowances approved by the Central Government are as follows:
1. Number of allowances recommended to be abolished and subsumed:
3 of 37 subsumed allowances will continue as separate identities due to unique nature of these allowances.