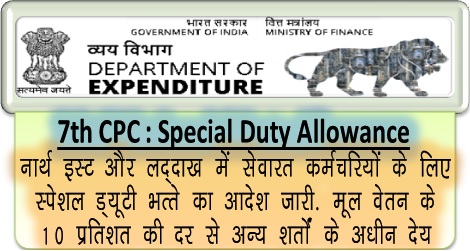 Subject: Implementation of the recommendations of the 7th Central Pay Commission – Grant of Special Duty Allowance for the Central Government employees serving in the North Eastern Region and Ladakh.

Consequent upon the acceptance of the recommendations of Seventh Central Pay Commission by the. Government, the President, in supersession of all existing orders issued on the subject from time to time, is pleased to decide that Central Government employees, serving in the North Eastern Region and Ladakh, shall be paid Special Duty Allowance (SDA) at the rate of 10% of Basic Pay.
2. The term ‘Basic Pay’ in the revised pay structure means the pay drawn in the prescribed Levels in the Pay Matrix but does not include any other type of pay like Special Pay, etc.
3. Special Duty Allowance will not be admissible along with Tough Location Allowance, Employees will have the additional option to avail of the benefit of Special Compensatory (Remote Locality) Allowance (SCRLA) as per 6th Central Pay Commission rates. along with Special Duty, Allowance at revised rates.
4. Special Duty Allowance shall not be admissible during the periods of leave/training/tour etc. beyond full calendar month(s), in case, the employee is outside the North-Eastern Region and Ladakh during leave/training/tour etc. The allowance shall not be admissible during suspension and joining time.
5. These orders shall take effect from 1st July, 2017.
6. These orders shall also apply to the civilian employees paid from the Defence. Services Estimates and the expenditure will be chargeable to the relevant head of the Defence Services Estimates. In respect of Armed Forces personnel and Railway employees, separate orders will be issued by the Ministry of Defence and Ministry of Railways, respectively.
7. In so far as the employees working in the Indian Audit and Accounts Department are concerned, these orders are issued with the concurrence of the Comptroller and Auditor General of India.
Hindi version is attached.
sd/-
(Annie George Mathew)
Joint Secretary to the Government of India 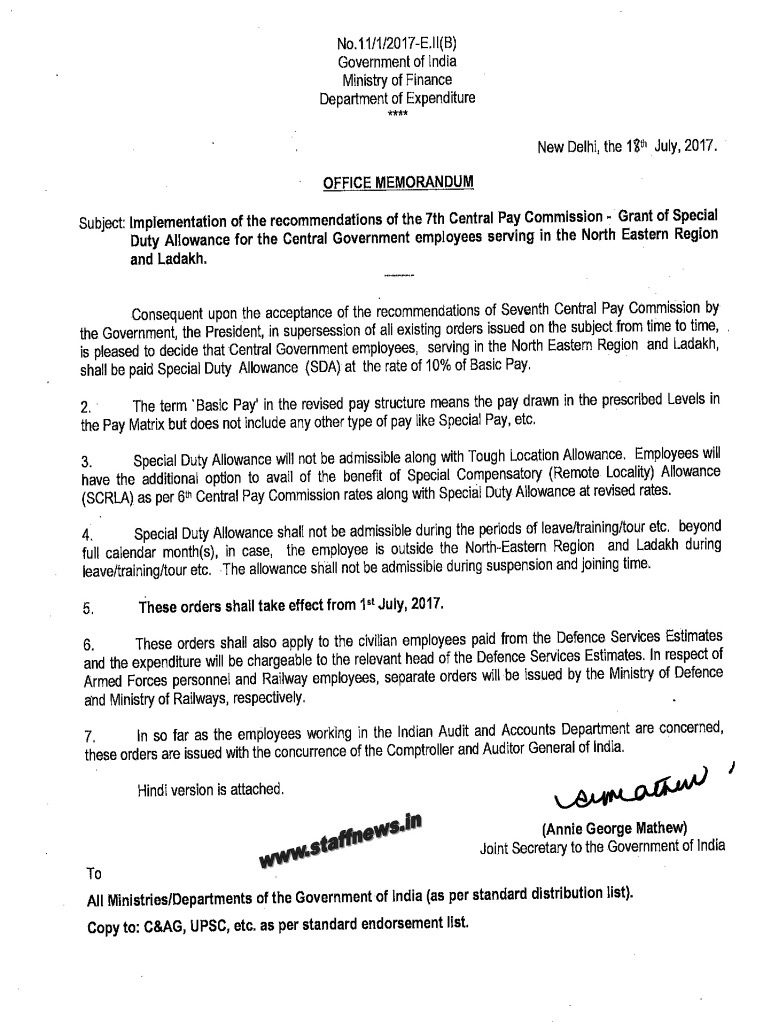