Sir,
The undersigned is directed to refer to this Ministry’s letter no. 1(4)/2007-D(Pen/Policy) dated 4.12.2007 under which revised methodology to workout restoration of pension was issued for those Defence pensioners who had drawn lump sum payment on absorption in Public Sector Undertaking/Autonomous Bodies. The restored pension as well as full amount of pension was further revised with effect from 01.01.2006 in terms of this Ministry’s letter No. 1(4)/2007- D(Pension/Policy) dated 21.08.2009 as amended vide letter No. 1(4)12007-D(Pen/Policy) dated 09.02.2011, letter No. 1(1)/2014- D(Pen/Policy) dated 16.10.2014. As per these orders, payment of dearness relief and additional pension to old pensioners is regulated on the basis of the notional full revised pension.
2. In compliance of Hon’ble Supreme Court Order dated 01 09.2016 in Civil Appeal No. 6048/2010 and Civil Appeal No. 6371/2010, Govt. of India, Ministry of Personnel, Public Grievances & Pensions, Department of Pension & Pensioners Welfare vide their OM F.No. 4/34/2002- P&PW(D)-Vol II. dated 23.6.2017 read with OM of same No dated 21.07.2017, have decided to extend the benefit of ibid orders of Hon’ble Supreme Court to all such absorbee pensioners who had taken 100% lump sum amount and in whose case 1/3rd pension had been restored after 15 years, by restoring their full pension after expiry of commutation period of 15 years from the date of payment of 100% lump sum amount.
3. Matter has been considered and it has been decided that the provisions of Govt. of India, Ministry of Personnel, Public Grievances & Pensions, Department of Pension & Pensioners Welfare OM F. No. 4134/2002-P&PW(D)-Vol. II dated 23.6.2017, shall also apply mutatis mutandis to all Armed Forces pensioner absorbed in PSUs/ Autonomous bodies. Other terms and conditions prescribed vide this Ministry’s letters issued from time to time which are not affected by the provisions of this letter, shall remain unchanged.
4. The Armed Forces PSU absorbees whose full pension is restored in terms of the above instructions would also be entitled for revision of their pension in accordance with the instructions issued from time to in implementation of the recommendations of the Pay Commissions, inculding 7th Central Pay Commission.
5. The pension in terms of these orders shall be revised by respective Pension Sanctioning Agencies suo-moto by issuing Corrigendum PPOs in all affected cases. No application in this regard shall be called for either from the pensioners or from the PDAs concerned.
6. This issues with the concurrence of the Finance Division of theis Ministry vide their ID No. 31(8)/9/Fin/Pen dated 07.09.2017.
7. Hindi version will follow.
Sd/-
(Manoj Sinha)
Under Secretay to Govt. of India
Source: Click on Image to view/download DESW Order 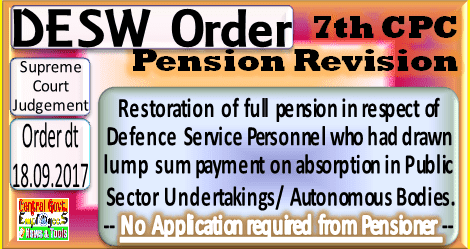