Subject: RECOMMENDATIONS OF THE SEVENTH CENTRAL PAY COMMISSION ON ALLOWANCES/ CONCESSIONS IN RESPECT OF OFFICERS / JCOs AND ORs OF THE ARMY AND EQUIVALENT RANKS OF NAVY AND AIR FORCE – IMPLEMENTATION OF


I am directed to say that consequent of finalisation of Seventh Central Pay Commission award on allowances/ concessions by the Government vide (Ministry of Finance Resolution No. 11-1/2016-IC dated 6th July 2017, the President is pleased to sanction revised rates of Allowances/Concessions in respect of Officers /JCOs and ORs of the Army and equivalent rank of Navy and Air Force personnel.

3.Based on the approved recommendations of 7th CPC, various existing Risk and Hardship allowances have now been subsumed in different cells of the new Risk and Harship matrix. The matrix is divided into 9 cells, based on Low, Medium and High risk juxtaposed with Low, Medium and High harship. One extra cell on the top is RH-Max, to include Siachen Allowance as a combination of risk and hardship maximum. However, the allowances shall maintain their names and conditions attached with their admissibility (unless otherwise stated). These allowances will be paid as per rate of the cell under which they have been placed in the Risk and Hardship Matrix. A copy of the Risk and Hardship Matrix is listed as per Appendix-C.

4.Based on the approved recommendations of 7th CPC, some allowances have been rationalized by subsuming in allowances with a different/new nomenclature. Orders for these allowances will be issued separately.

5.Some allowances have been abolished as per approved recommendations of 7th CPC and are listed as per Appendix-D of this letter.

6.The revised rates of the above allowances/ concessions will be effective from 1st July, 2017.

7.The other terms and conditions for grant of the respective allowances/ concessions would continue to be applicable in respect of the revised rates notified in the Appendices-A & B to this letter.

8.Certain allowances are dealt by other Wings in Ministry of Defence. These Wings will separately issue orders pertaining to them.

9.The term ‘Basic Pay’ for the purpose of these orders refers to basic pay as defined in relevant Army/Air Force Pay Rules and Navy Pay Regulations.

Yours faithfully,
sd/-
(M. Subbarayan)
Joint Secretary to the Govt. of India 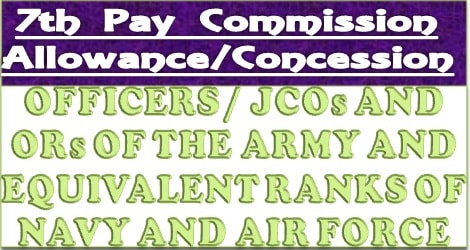