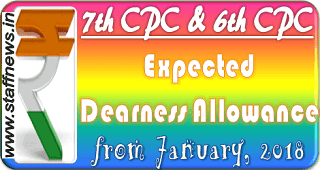 It is also mentioned that the enhancement in Dearness Allowance w.e.f. 01st July, 2017 is pending for approval by Government may be approved in this month.
July, 2017 is the first month of the second half year of 2017 and Index number
of CPI(IW) for all months are needed to calculate the expected DA w.e.f.
January, 2018.  Only July, 2017 CPI(IW) Index number is not sufficient for
speculation of Expected DA from January, 2018.  There are three situations
are illustrated in this post taking equal increase in rest of months of second
half of this year.  A higher increase of 5 points in July, 2017 Index is
giving 3% or 4% in Jan, 2018 6th CPC DA and 2% or 3% increase in 7th CPC DA.