2. As provided in para 7 of Ministry of Finance, Department of Expenditure’s Resolution No. 1-2/2016-IC dated 25th July, 2016, the matter regarding allowances (except Dearness Allowance) based On the recommendations of the 7th Central Pay Commission (CPC) was referred to a Committee under the Chairmanship of Finance Secretary and until a final decision thereon, all Allowances have been paid at the existing rates in the existing pay structure.

The Deputation (Duty) Allowance admissible shall be at the following rates:

a) In case of deputation within the same station the Deputation (Duty) Allowance will be payable at the rate of 5% of basic pay subject to a maximum of Rs.4500 p.m.

b) In case of deputation involving Change Of station, the Deputation (Duty) Allowance will be payable at the rate of 10% of the basic pay subject to a maximum of Rs.9000 p.m.

c) The ceilings will further rise by 25 percent each time Dearness Allowance increases by 50 percent.

Note: 1 “Basic pay’ in the revised pay structure (the pay structure based on 7th Central Pay Commission recommendations) means the pay drawn by the deputationist, from time to time, in the prescribed Level, in Pay Matrix, of the post held by him Substantively in the parent Cadre, but does not include any other type of pay like personal pay, etc.

Note: 2 In cases where the basic pay in parent Cadre has been upgraded on account of non-functional upgradation (NFU), Modified Assured Career Progression Scheme (MACP), Non-Functional Selection Grade (NFSG), etc., the upgraded basic pay under Such upgradations shall not be taken into account for the purpose of Deputation (Duty) Allowance.

Note 4 In case of Reverse Foreign Service, if the appointment is made to post whose pay structure and/ or Dearness Allowance (DA) pattern is dissimilar to that in the parent Organization, the Option for electing to draw the basic pay in the parent cadre along with the Deputation (Duty) Allowance thereon and the personal pay, if any will not be available to such employee.

Note: 5 The term ‘same station’ for the purpose will be determined with reference to the station where the person was on duty before proceeding on deputation.

6. In so far as persons serving in the Indian Audit & Accounts Department are concerned, these Orders issue after consultation with the Comptroller & Auditor General of India. 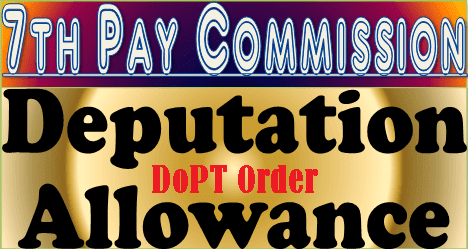