All India LTC facility for officers/staff working in Railway – Procedure for availing optional scheme: Office Order No. 104 of 2018 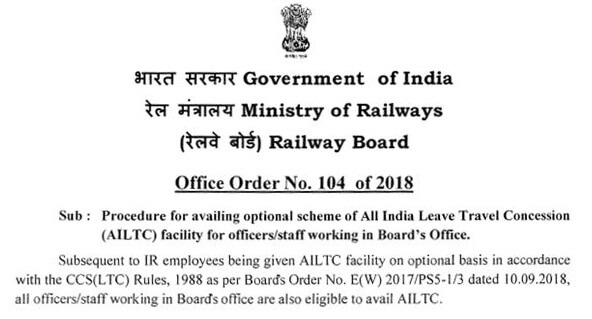 Subsequent to IR employees being given AILTC facility on optional basis in accordance with the CCS (LTC) Rules, 1988 as per Boards Order No. E(W) 2017/PS5-l/3 dated 10.09.2018, all officers/staff working in Boards office are also eligible to avail AILTC.


2. For availing the facility of AILTC, Officer/Staff working in Board’s Office should have rendered four or more years of continuous service on the date of the commencement of the journey. The following guidelines may be adhered to by the applicant for availing AILTC:-

i) Privilege Pass Surrender Certificate (PPSC) may be obtained from ‘G Branch by following the prescribed procedure as contained in Boards letter dated 10.09.2018. However, in the first instance before applying for PPSC, the concerned staff should check his/her eligibility for availing AILTC.

ii) Leave of any type may be applied for and a declaration/advance intimation letter as per proforma enclosed at Annexure-I intending to avail AILTC may be submitted to the concerned Establishment Branch (ERB-I, ERB-II & ERB-V) along with original copy of PPSC issued by ‘G’ Branch.


iii) In case, AILTC advance is required, a separate request may be submitted as per prescri bed proforma enclosed at Annexure-II to the concerned ERB section ( ERB-I, II & V) in addition to submission of self-declaration/advance intimation letter. AILTC advance is to be applied 65 days (in case of Air travel) or 125 days ( in case of train travel) before the proposed date of outward journey and within ten days of the drawal of advance, the concerned employee is to produce tickets, irrespective of the date of commencement of the journey.


iv) LTC advance upto 90% of the estimated fare would be sanctioned.


v) In case, an employee performs journey without intimation and submission of original PPSC to the concerned ERB section, claim for reimbursement under AILTC would not be entertained.


vi) Subsequent to performing the journey related to AILTC, necessary claims for reimbursement /difference of expenditure ( in case of advance) may be submitted directly to respective Cash-I/II/III Sections as per enclosed proforma at Annexure-III for final settlement with all necessary required document.

viii) After undertaking journey, unspent amount of AILTC advance, if any, should be remitted within one month and in one lumpsum.


ix) Travel by Premium trains/Premium Tatkal trains/Suvidha trains are allowed on LTC however, travel in such train is to be by shortest route. Reimbursement of tatkal charges or premium tatkal charges shall also be admissible for the purpose of LTC. Flexi Fare (dynamic fare) applicable in Rajdhani/Shatabdi/Duronto trains is also admissible for the journey(s) performed by these trains on LTC.

x) Those officials entitled for Air travel are required to travel by Air India only at LTC-80 fare or less. Fare indicated at LTC-80 is the maximum permissible ceiling limit for reimbursement; however, efforts should be made to book Air tickets at the cheapest fare possible.


xi) Those employees ( i.e, Pay Level 1 to 8 of Pay Matrix as per 7th CPC) who are not entitled to travel by Air may travel by any airline; however, reimbursement in such cases shall be restricted to the fare of their entitled class of train /transport or actual expense, whichever is less. Further, dynamic fare component in respect of Rajdhani/Shatabdi/Duronto trains shall not be admissible in such cases i.e., where a non­ entitled Government servant travels by air and claims reimbursement for the entitled class of Rajdhani/Shatabdi/Duronto trains.


xii) In all cases, Air ticket is required to be booked either directly through the airlines ( Booking Counters, website of airlines) or by utilizing the service of Authorized Travel Agents viz ‘MIS Balmer Lawrie & Company’, M/s Ashok Travels & Tours’, and IRCTC ( to the extent IRCTC is authorized as per DOP&Ts OM No. 31011/6/2002-Estt(A) dated 2.12.2009) while undertaking LTC journey. Booking of tickets through other agencies is not permitted and no request for relaxation of rules for booking the tickets through any other agencies shall be considered by Boards office.


xiii) ) It may also be noted that Travel on Tour packages is not allowed, except in case of tours conducted by Indian Tourism Development Corporation (ITDC), State Tourism Development Corporation (STDC) and IRCTC. In such cases, only the fare component shall be reimbursable provided ITDC/STDC/IRCTC separately indicate the fare component and certify that the journey was actually performed by the Government servant and his family members for which he/she is claiming the All India Leave Travel Concession.


xiv) All tickets purchased should be submitted in original along with boarding passes duly stamped by Airport authorities (in case of Air travel) at the time of submitting claims after performing journey.

a) General Branch will issue the Privilege Pass Surrender Certificate (PPSC) for AILTC purpose within 10 days of receiving the request from Applicant as per the instructions contained in E(W)’s above mentioned letter.
b) After receiving the request for optional AILTC as per Annexure-I & II, respective Establishment Branches (ERB-I, ERB-II & ERB-V) would verify/certify the necessary columns in it along with checking the admissibility as to whether the concerned employee is eligible for AILTC as per extant policy instruction and forward it to concerned Cash Section in case LTC advance has been sought.
c) An acknowledgement to the concerned employee may also be made and a copy of guidelines for perusal of employee may be given so as to ensure that the concerned employee is fully aware of the extant rules to be followed while availing optional AILTC and that there is no issue with regard to clearing of AILTC claim. In case AILTC is not admissible for the concerned employee, the same be advised in writing to the employee within three working days of the receipt of the intimation. A copy be also endorsed to the concerned Cash Section for information and record.
d) Concerned Cash section would process the case for LTC advance and reimbursement/claim as per extant rule for AILTC issued by Board’s Office like normal reimbursement of TA/DA, Children Education Allowance (CEA) claim without referring it to Associate Finance. However, if any clarification is required on the extant rules, the nodal branch may be consulted. In respect of AILTC advance/clearing of claim, concerned Cash section are to sanction the amount based on concerned employee’s eligibility for travel in AILTC, fares of shortest route by train and as per fare available under LTC-80 in respect of Air ticket.
e) After clearing of LTC claim, the concerned Cash Section would maintain the details of such claim separately as per CCS(LTC) Rule for maintaining register of LTC claim. Proforma is at Annexure-IV.
f) ERB-II, V and PAO Sections would also be required to make an entry in the service book of concerned employee claiming LTC along with an undertaking of completion of four or more years of service in this regard.
g) ERB-I, II, V, Cash-I, II, Ill & PAO sections may also go through the instructions issued on AI LTC/LTC by E(W) branch & DOP&T before processing the request related to AILTC.

4. All concerned may note that any misuse of AILTC will be viewed seriously and the concerned official would be liable for appropriate action under the relevant rules. Cash section may also randomly get some of the air tickets verified from the airlines concerned with regard to the actual cost of air travel vis-a-vis the cost indicated on the air tickets submitted by the officials.
5. The above issues with the approval of competent authority.
Encl: Annexure- I to IV
No. 2018/0&M/2/15
Dated: 26/09/2018
(H. Moharana)
Joint Secretary/Railway Board
View Annexures:

Railways All India LTC: Application Form for grant of Advance