Sub: Fixation of pay of the employees who got promoted to the post of higher Pay level after being granted the benefit of pay fixation on grant of financial upgradation under MACPS.


The issue regarding regulation of pay fixation when the promotion to a higher pay level takes place in the 7th CPC period after the employee has already availed the benefit of pay fixation on grant of Financial Upgradation under MACPS has been under consideration for quite some time. It has been decided in consultation with DoP&T that the pay fixation benefit on grant of MACP after 7th CPC may be regulated in the following manner:-
(i) Benefit of pay fixation available at the time of regular promotion shall also be allowed at the time of financial upgradation under the Scheme (as prescribed in Para 13 of RS(Revised Pay) Rules, 2016).

(ii) There shall, however, be no further fixation of pay at the time of regular promotion if it is in the same pay level as granted under MACPS.
(iii) However, at the time of actual promotion if it happens to be in a post carrying higher pay level than what is available under MACPS, then he shall be placed in the level to which he is promoted-at a cell in the promoted level equal to the figure being drawn by him on account of MACP. If no such cell is available in the level to which promoted, he shall be placed at the next higher cell in that level. The employee may have an option to get this fixation done either on the date of promotion or w.e.f. the date of next increment as per the option to be exercised by him.

2. This has the approval of the Finance Directorate of Ministry of Railways.
3. Hindi version is enclosed.
sd/-
(Subhankar Dutta)
Dy. Director, Pay Commission-V
Railway Board 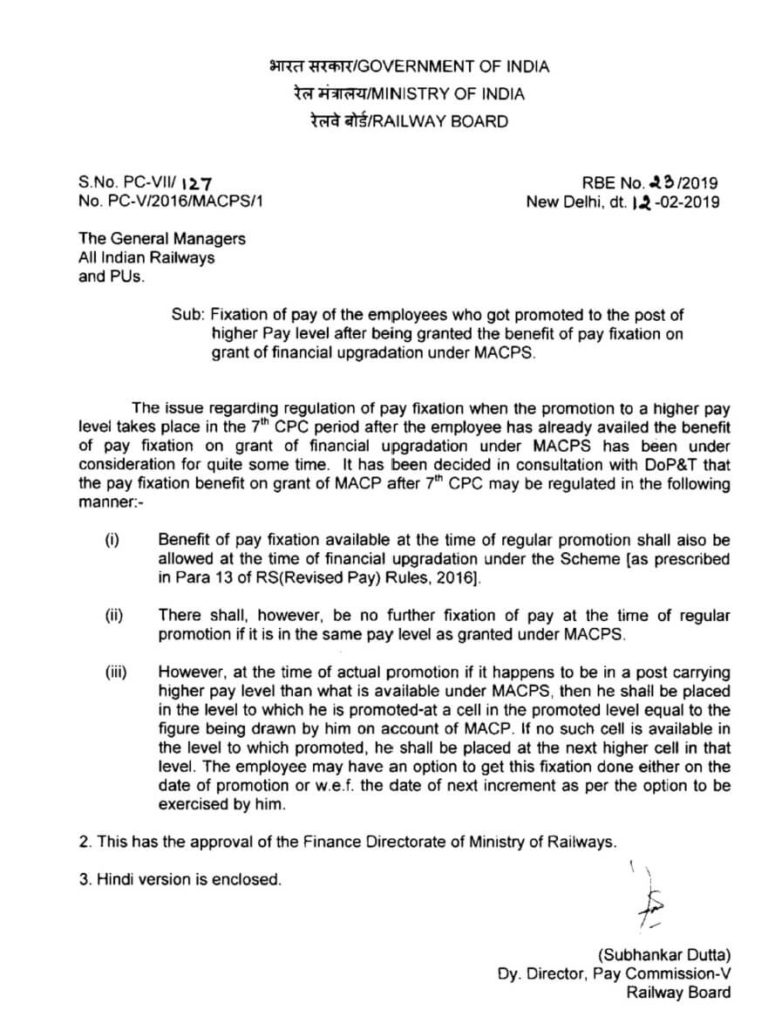