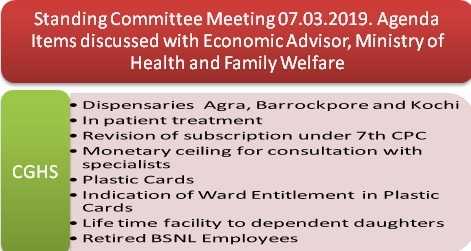 (i) Item No.12 : Opening of CGHS Dispensaries in Agra, Barrackpore (Kolkata) and Kochi.
Economic Advisor, Ministry of Health and Family Welfare : stated that dispensaries under the Department of Postal and Telegraphs have been taken over by CGHS, Agra for CGHS beneficiaries and would be functional w.e.f 1.4.2019 and extension counter/new CGHS Wellness Centre at Barackpore will start functioning w.e.f. 28.2.2019. He further informed that necessary initiative has been taken for opening CGHS Dispensaries at Kochi which has been approved on August, 2018 and would be functional in the near future. It was decided that this item may be treated as closed.
(ii) Item No.15 : Central Government Health Scheme: Empanelling of hospitals and streamlining of procedure to provide in-patient treatment to the beneficiaries.
EA, M/o H&FW stated that the demand raised by the Staff Side might be a suggestion. Empanelment of Hospital is a continuous process and as far as possible steps are being taken to streamline the procedure. It is not factually correct that there is only one or two hospitals empanelled under CGHS, in Mumbai. In Mumbai there are 25 hospitals, 22 Eye-clinics and 5 Dental hospitals empanelled under CGHS.
He further informed that in so far as matters relating to the delay in payment of bills to concerned hospitals in case of Pensioners are concerned, the payment are to be made by CGHS of M/o H&FW or the Administrative Ministry may make the payment to those hospitals. By and large, payment of bills has to be made on time but sometimes payments are delayed due to budget constraints.
(iii) Item No. 33 : Disproportionate revision of subscriptions under CGHS, due to the revision of pay and allowances of Central Government Employees on account of the implementation of 7th CPC:
EA, M/o H&FW stated that the last time the CGHS subscription rates were fixed was in the year 2006, but there has been about 140% increase in the salary of the Central Govt. employees, since then. In comparison to the substantial increase in the salary of the Central Govt. employees since 2006, the revision of subscription under CGHS is very less.
(iv) Item No.39 & 40 : Direct consultation with Specialists in CGHS / Central Government/State Government Hospitals/ Polyclinics: Continuation of the facility for those CGHS beneficiaries, who were eligible for direct consultation before revision of the Monetary Ceiling, including pensioners and family pensioners.
EA, M/o H&FW stated that the demand from the Staff Side to increase the monetary ceiling for seeking appointment and for direct consultation with specialists in CGHS etc., has not been considered by the Ministry and order to this effects has been issued vide OM dated 5.12.2017. Therefore, this item may be treated as closed.
(v) Item No.41 : Plastic Cards :
EA, M/o H&FW informed that the distribution of Plastic Cards by and large has been completed. Facility for self printing of CGHS Plastic Card has also been given to CGHS beneficiaries.
(vi) Item No.42 : Indication of “Ward entitlement” in plastic cards of pre-01.06.2009 beneficiaries :
EA, M/o H&FW stated that some pensioners, who are entitled for higher category wards are getting, lower category Plastic Cards. There are few isolated instances, which has been brought to the notice of M/o H&FW. Further, Additional Directors of all City Headquarters have been advised that whenever any beneficiary approaches CGHS for their entitled ward category his/her entitlement should be restored.
Staff Side insisted that considering the difficulties faced by the senior citizens, Ministry of Health may re-consider its decision.

(vii) Item No.43 : Grant of one time option to CGHS beneficiaries to opt for entitlement as per their revised Pay in Pay Band :
EA, M/o H&FW stated that the demand to grant one-time option to pre-1.6.2009 pensioners to opt for re-determination of their ward entitlement based on their notional pay in pay band is not allowed.
(viii) Item No. 44: Provision of CGHS facility for life time to dependent/ disabled/ mentally retarded children of Central Government Employees/Pensioners :
EA, M/oH&FW stated that in accordance with Pension Rules 1972, Central Govt. employees/Pensioner’s children with special needs and disabilities are allowed family pension, whereas CGHS facilities for mentally/physically disabled married daughters of Central Govt. employees/Pensioners is not allowed. The matter is now being examined, so as to provide CGHS facilities to dependent daughters of the Central Govt. employees / pensioners after their marriage.
(ix) Item No.45 : Extension of CGHS facilities to retired BSNL employees – follow up action and fixation of rates of contribution & ward entitlement by the Ministry of Health and family Welfare:
Eco. Advisor, MoH&FW : informed that the CGHS facility is available to retired BSNL employees. Since notification in this regard has not been uploaded on the website of the M/o Health and F.W., retired BSNL employees are not aware of this facility. The information has now been placed on the website of M/o.H&FW.
Secretary, Staff Side stated in reference to item no. 15; regarding empanelling of hospitals & streamlining the procedure to provide in-patient treatment to the CGHS beneficiaries, MoH&FW should consider empanelling maximum number of hospitals as per CGHS guidelines and these hospitals should have door step facilities.
He further informed that the rates fixed by CGHS were so low that the hospitals were refusing to admit the CGHS beneficiaries. Moreover, many reputed hospitals in cities have not applied for empanelment which could benefit CGHS beneficiaries. There is also an issue with disproportionate revision of subscription under CGHS, which was not consulted with the Staff Side, before revision.
He also informed that in the last meeting, Standing Committee Chairman directed that health related issues should be discussed with the Ministry of Health & FW, to arrive at a resolution. Accordingly, 15-20 agenda items related to health issues were considered and the proposals were sent to Ministry of Health for discussion, but so far, no discussions have been held. Chairman stated that Staff Side may send the above agenda items to DOPT for onward transmission to Mo.H&FW for further deliberations in this regard. Secretary, Staff Side further suggested that the orders relating to CGHS beneficiaries are neither uploaded on the website of the Ministry nor copies of the orders were sent to Staff Side, NC (JCM). The M/o.H&FW agreed to take necessary action in this regard.
Secretary, Staff Side also conveyed his appreciation relating to several good measures taken by the Government to expedite the settlement of Hospital bills and modified payment system by CGHS through UTI-ITSL without initial provisional payments for final settlement of bills. However, he informed that sometimes the UTI-ITSL system does not function properly and retired CGHS beneficiaries face a lot of problems. He asked the M/o.H&FW to consider adopting some other mode of payment to resolve the issue.
Chairman stated that the issues raised by the Staff Side have been taken note of and the matter will be further examined by the Ministry of Health and Family Welfare.