(iv) Girls upto Graduation/ professional/ vocational courses are eligible for free second class Monthly season ticket from Home town to School/ College / Institution. (In case of the Boys this facility is available upto 12th standard) .
(v) Girls of Government School in Rural areas who travels to appear entrance exams for national level Medical, engineering etc are eligible for 75% concession in second class.
(vi) A reservation quota of six berths in sleeper class in long distance Mail/ Express Trains and a reservation quota of six berths in 3AC class of all Rajdhani/ Duronto/fully Air Conditioned / Express trains has been earmarked for female passengers irrespective of their age, travelling alone or in a group of female passengers.

(viii) In the computerized Passenger Reservation System (PRS) there is a provision to allot lower berths to Senior Citizens, Female passengers of 45 years and above automatically, even if no choice is given, subject to availability of accommodation at the time of booking.
(ix) After departure of the train, if there are vacant lower berths available in the train and if any person with disability booked on the authority of handicapped concession or a senior citizen or a pregnant woman, who has been allotted upper / middle berth, approaches for allotment of vacant lower berths, the on board Ticket Checking Staff has been authorized to allot the vacant lower berth to them making necessary entries in the chart.
(x) Separate counters are earmarked at various Passenger Reservation System(PRS) centres for dealing with the reservation requisitions received from person with disabilit;y, senior citizens, Ex. MPs, MLAs, female passengers, accredited journalists and freedom fighters, if the average demand per shift not less than 120 tickets. In case there is no justification for earmarking of an exclusive counter for any of these categories of persons including female passengers or senior citizens, one or two counters depending upon the total demand are earmarked for dealing with the reservation requests for all these categories of persons.
At those reservation offices which have not been computerized and where separate counters for female passengers are not in existence, female passengers are not required to be compelled to join the general queues and are to be attended separately at the same counter as for general passengers.
(xi) Accommodation is also earmarked for female passengers in the unreserved coaches of Mail/ Express trains.
(xii) Separate compartments/ coaches have been earmarked in suburban trains for exclusive use of female passengers.
(xiii) Ladies special trains are also run wherever required and feasible.
(xiv) Waiting room / halls are earmarked for female passengers at important stations.
(xv) Separate toilets for female passengers are provided as per norms.
****** 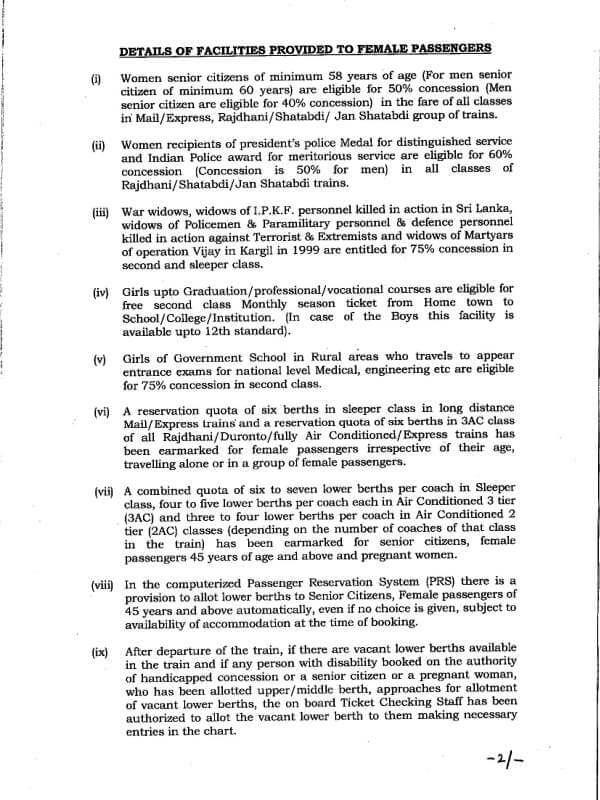 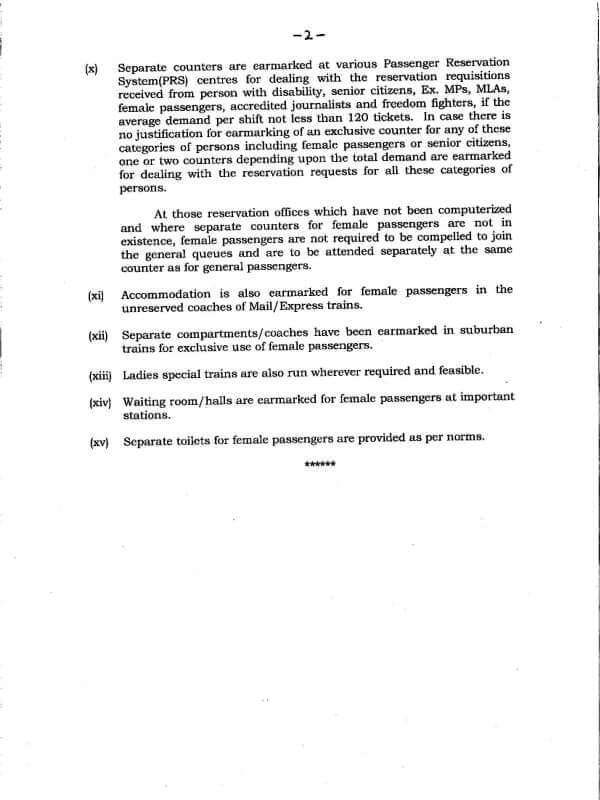