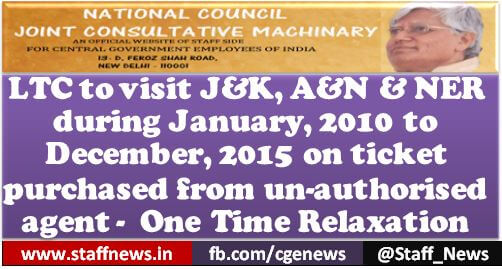 NC Staff Side JCM letter 02 Mar 2020 regarding Grant of One Time Relaxation to the Central Government Employees who have availed LTC-80 and travelled by air by purchasing ticket from authorities other than authorized agents.

Subject Grant of One Time Relaxation to the Central Government Employees who have availed LTC-80 and travelled by air by purchasing ticket from authorities other than authorized agents.

We thankfully acknowledge the receipt of the above mentioned DOP&T clarifications issued regarding relaxation of purchase of air tickets from other than authorized travel agent for the purpose of LTC. You are aware this issue was raised by the Staff Side in the Standing Committee Meeting held under your Chairmanship on 07.03.2019 and also in the meeting of the National Council (JCM) held under the Chairmanship of Cabinet Secretary on 13th April, 2019. The relevant portion of the minutes of the meeting is given below for your kind ready reference.

Extract from the minutes of the Standing of the National Council (JCM) Committee Meeting held on 07.03.2019.

“viii) Item No. 15 : Grant of One Time Relaxation to the Central Government Employees who have availed LTC-80 and travelled by air by purchasing ticket from authorities other than authorized agents :

Staff Side proposed that (a) If the employee has actually travelled in Air Ind ia .flight. then the l TC-80 fare of the journey day may be paid to him irrespective of the fact that ticket was purchased from authorized Agent or not. Any excess amount over and above the LTC-80 fare can be recovered. (b) No disciplinary action and stoppage of future l TC may be taken (c) A general instruction in this regard may be issued to aff the Departments to regularize all the pending LTC-80 cases as above.

Chairman agreed to consider the demand of the Staff Side.”

Extract from the minutes from the 47th Meeting of the National Council (JCM) held on 13th April, 2019.

“5.7 Regarding LT C-80 cases, there are instances where huge amount is deducted from employees, especially in various Defence Establishments under MoD from the funds released to them on retirement as terminal benefits on the ground that these employees have travelled in private airlines and also the employees who have travelled in Air India Flight have purchased Flight Tickets from mother than authorized agents. The demand of the Staff Side for granting One Time exemption to such cases is still pending with DOP&T. this is a serious matter since as per Supreme Court directions, no recovery should be made from the employees at the time of retirement. It is requested that the DOP&T may grant On.e Time Exemption to all such cases, especially in the case of those employees who are otherwise not entitled for flight for settlement of all such LTC-80 cases as a One Time measure.“

Apart from the above this Office has made several correspondences in the past. In the above mentioned DOP&T instructions only the LTC by Air visit to Jammu and Kashmir and North East Region is only covered. Andaman and Nicobar [stands (A&N) is not covered. Moreover, the period mentioned is only from January, 2010 – June, 2014. Due to this restriction the employees who have availed LTC for visiting A&N and have purchased tickets from other than authorized agents will not be getting the benefit of relaxation. Moreover, the benefit of LTC to visit A&N was extended only during the year 2014 vide DOP&T OM dated 26th September, 2014. Therefore, the employees who have availed LTC to A&N by purchasing air ticket from other than authorized agents during the Year 2014 and 2015 are also left out. The Authorities in the Departments have now started recovery action from these employees. Therefore, to settle this issue / outstanding grievance once for all we propose the following for your favourable consideration.

Sir, we request you to consider the above request of tours and to issue necessary instructions as above so that the issue is permanently resolved and the innocent employees who became the victims of such unauthorized agents are relieved from the present financial and mental hardship.

A copy of your instruction may please be endorsed to this Federation. 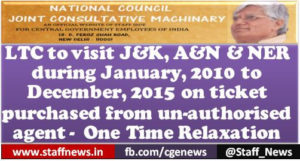