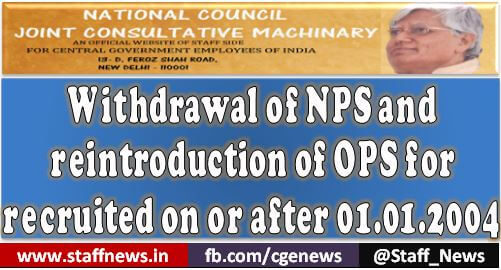 Scrap NPS – OPS for recruited against the available vacancies as on 31.12.2003 – NC Staff Side JCM writes to Cabinet Secretary 02 March 2020

Scrap NPS – OPS for recruited against the available vacancies as on 31.12.2003 – NC Staff Side JCM writes to Cabinet Secretary 02 March 2020

Demand: In a nutshell all those employees irrespective of their date of recruitment / selection who were recruited against the available vacancies as on 31.12.2003 should all be brought under the Old Pension Scheme under CCS (Pension) Rules, 1972.

Subject Withdrawal of NPS and reintroduction of Old Pension Scheme under CCS (Pension) Rules, 1972 to the Central Government Employees recruited on or after 01.01.2004.

This issue was discussed as an Agenda Item (2. Item No. 02/05/NC-44) in the 44th Ordinary Meeting of National Council (JCM) held on 28th May, 2005 under the Chairmanship of Cabinet Secretary. In this meeting the Staff Side have specifically stated that “they would not accept the new Scheme and prefer to disagree.” The Official Side reiterated that the new Scheme was a Defined Contribution Scheme which is fundamentally different from a Defined benefit Scheme. Financial compulsions have necessitated to shift to the New Scheme.

The Official Side, however, stated that the views and concerns of the Staff Side have been noted.

Staff Side requested that action taken on the views noted may be reported and further discussed.

The issue was again discussed in the 45th Meeting of the National Council (JCM) held on 14th October, 2006, as Agenda Item (Item No. 03/06/NC-45). In this meeting the Staff Side has stated “The new Scheme that has been imposed on the new entrants to Government service (recruited after 01.01.2004) is not acceptable, as the same is subject to the vagaries of the stock market.”

Further again the issue was discussed in the meeting of the Standing Committee of the National Council (JCM) held on 14th November, 2006, the Staff Side once again oppose the NPS and reiterated their demand for withdrawing the NPS.

The Staff Side again raised the issue in the Standing Committee Meeting of the National Council (JCM) held on 14th December, 2007, wherein the Official side gave the following assurance. “For employees who had entered w.e.f. 01.01.2004 are not likely to be worse off vis-a-vis the current Pension system in force, as the replacement rate would match to the present one. Thus, NPS is a win-win situation for employees and the Government.”

However, the above assurance given by the Government has proved to be false since at present the employees who are appointed after 01.01.2004 and governed under the NPS have now started retiring from service and they are getting a very meager Pension of Rs. 2,000/- to 3,500/- per month, whereas the minimum Pension under the Government of India to the Central Government Employees is now Rs. 9,000/- + DR.

Considering the above situation we once again represented the matter before the 7th CPC and based on the 7th CPCs recommendation , Government constituted a Committee on NPS. The Staff Side submitted its detailed Memorandum to the Committee and also appeared in person before the Committee and have reiterated our position that the Central Government Employees as a whole must be fully excluded from the ambit of the Defined Contributory Pension Scheme, since it has taken away the benefit of defined and guaranteed Pension to the Central Government Employees.

The issue was once again raised by the Staff Side in the meeting of the Standing Committee of National Council (JCM) held under the Chairmanship of Secretary / DOP&T. The extract of the Minutes is given below for your ready reference.

Staff Side told that they reiterate their stand in that, the NPS should be scraped and the Defined Guaranteed Pension under the CCS (Pension) Rules, 1972 should be ·restored to the employees, who were recruited on or after 01.01.2004. They also demanded that GPF facility may be provided to the NPS governed employees on an optional basis.

Chairman desired that the Department of Pension may consider the demand in reference to GPF of the Staff Side.”

The Staff Side again raised the issue in the presence of the then Cabinet Secretary in the National Council (JCM) Meeting held on 13.04.2009. The relevant portion of the Minutes of the Meeting is given below :-

“4.3 Withdrawal of NPS and re-introduction of Defined pension under CCS (Pension) Rules, 1972 he emphasized the Government to recommend at least 50% of the last pay drawn as minimum Pension to the retired I retiring Central Government Employees. “

“5.14 Secretary, Staff Side stated that they were opposed to NPS and demanded that the Old Pension Scheme be restored. He further stated that the Government should guarantee Pension of 50% of the last pay drawn to the employees recruited on nor after 01.01.2004. He further demanded facility of GPF and Family Pension to all employees.”

From all the above deliberations which have taken place in the National Council (JCM) you will appreciate that how serious the issue is.

“4. ……………… in all cases where the results for recruitment were declared before 01.01.2004 against vacancies occurring on or before 31.12.2003, the candidates declared successful for recruitment shall be eligible for coverage under CCS (Pension) Rules, 1972. Accordingly, such Government servants who were declared successful for recruitment in the results declared on nor before 31.12.2003 against vacancies occurring before 01.01.2004 and are covered under the National Pension System on joining on or after 01.01.2004, may be given a onetime option to be covered under the CCS (Pension) Rules, 1972.”

Already the Government employees are divided into two classes, one making subscription and another making no subscription but receiving 50% of the last Basic Pay as Guaranteed Pension. Now by the above mentioned DOP&T OM again another class of employees within the NPS Scheme has been introduced. This has resulted in lot of discontentment amongst the Central Government Employees. Therefore, without prejudice to our right to continue to represent to the Government to withdraw the NPS and to reintroduce the Old Pension Scheme under CCS (Pension) Rules, 1972 to all the Central Government Employees especially those who are recruited on or after 01.01.2004, we suggest the following as an immediate redressal of the grievance.

1) All the Central Government Employees who were recruited against the available sanctioned vacancies in different categories during the Year 2003, irrespective of the fact that whether selection process was completed on or before 31.12.2003, or the Notification / Call Letter / Interview / Selection process was completed on any year after 31.12.2003, but vacancies on the particular post were available on 31.12.2003, all such cases should be brought under the coverage of the Old Pension Scheme, since the recruitment process was delayed by the concerned Departments even though vacancies were available on 31.12.2003. In a nutshell all those employees irrespective of their date of recruitment / selection who were recruited against the available vacancies as on 31.12.2003 should all be brought under the Old Pension Scheme under CCS (Pension) Rules, 1972.

As assured in the National Council (JCM) Meeting, GPF Scheme may be introduced to the employees governed under NPS at present.

As demanded by the Staff Side 50% of the last pay drawn should be guaranteed as Pension under the NPS Scheme till the Government withdraws the NPS for Central Government Employees.

We request you to convene a meeting of the Standing Committee of the National Council (JCM) under your Chairmanship to discuss the entire issue and to reach an amicable settlement. 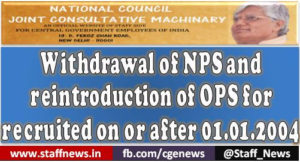