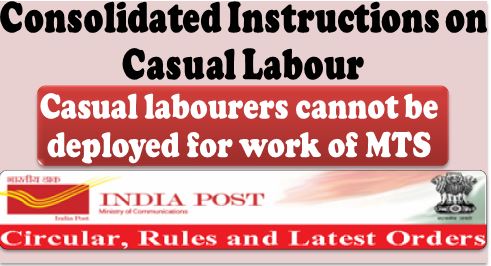 Consolidated Instructions on Casual Labour issued by Department of Posts

No. 2-1/2002-PE-I
Government of India
Ministry of Communications
Department of Posts

I am directed to circulate the Department of Personnel & Training OM No. 49014/5/2019-Estt.(C) dated 13.02.2020 on the above noted subject wherein various instructions on the issue, issued by the Government from time to time and still in vogue, have been consolidated under easily comprehensible headings for the facility of reference.

2. Vide this Directorate OM No. 2’10I88-PE’I dated 04.02.1997 , a complete ban on creation and recruitment of casual labourers in the Department of Posts including Civil Wing at all levels was ordered and all the Head of Circles were requested not to deploy any casual labour without the express approval of the Directorate. Further, the instructions were reiterated vide this Directorate OM No. 2-1/2002-PE-I dated 14.02.2002.

3. Further vide Directorate OM No. L-2012008-PCC dated 24.09.2010, while adopting a common designation for the erstwhile Group’D as ‘Multi Tasking Staff (MTS) Group ‘C’, some additional duties were assigned to MTS Cadre in addition to their existing duties such like watch and ward / caretaker duties, opening and closing of rooms, general cleanliness and upkeep of section / unit / office including dusting of furniture, cleaning of building, rooms, fixtures: upkeep of parks, lawns, potted plants etc.

5. It is therefore, once again reiterated that engagement of casual labourers for the work of regular nature in anticipation of approval from the Directorate is totally prohibited. Heads of Circle will be held responsible for violation of these instructions on the issue.

6. It will also be relevant to mention that, a report of Director General Audit (P&T) submitted on test check, conducted for the period 2016-L7 to 2018-19 at field offices of Department of Posts, had revealed that in some Circles casual Labourers were engaged directly for performing skilled duties of regular nature as well as non skilled duties of various multipurpose tasks like mail sorting, delivery of mails,loading and unloading of mails / parcels and back office work etc. on daily wages without entering into a valid agreement / contract in contravention of the GFR / instruction on the issue. It is therefore, requested that, all possible steps are taken to fill up the vacancies and to also follow the procedure laid down in GFR Rules as far as practicable for utilization / hiring of manpower due to acute shortages at various levels of operative staff, arising of emergent work in Post Offices / Railway Mail Service.

7. These instructions may be brought to the notice of all concerned immediately for necessary action and strict compliance. Irregular arrangements, if any, may be terminated immediately. 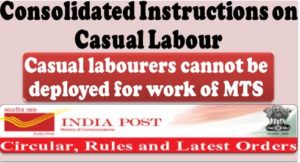