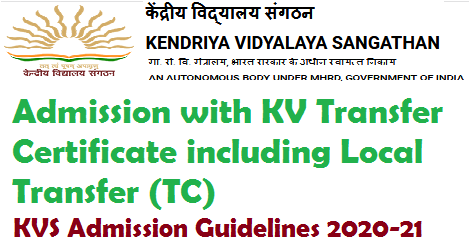 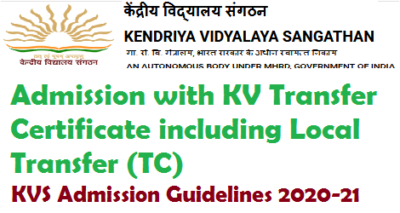 View: Details of the Admission Procedure From Class I and II to VIII and IX and XI in Kendriya Vidyalaya: KVS Admission Guidelines 2020

(i). Admission of children with KV TC will be automatic (over and above Class Strength) if the parent has been transferred from one station to another. When the class strength reaches 55, the efforts should be initiated to open additional sections.

(ii). Defence personnel and Para-military Forces who shift their families to a station of their choice whenever they are transferred to some non-family areas or posted in Naxal affected areas, can admit their children on KV TC in a KV located at the station where they will keep their family.

(iii). In all other cases where transfer of the parent is not involved, the admission with KV TC would be done only with the prior approval of the Deputy Commissioner of the region concerned.

(iv). All cases of local transfer on KV TC will be done with the approval of DC concerned on merit.

(v). A student with KV TC may also be permitted in project KVs only up to class strength of 45 with the prior concurrence of Chairman, VMC. Beyond this no admission on KV TC would be done in project schools. However, Deputy Commissioner of the region is empowered to allow admission in the project/nearest KV in extremely deserving cases.