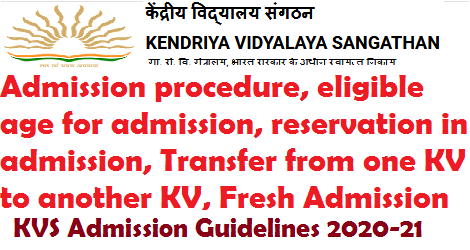 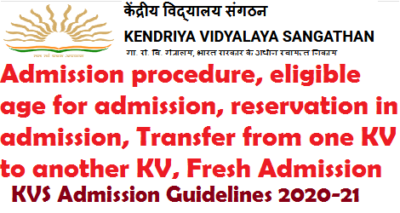 Unless the context suggests otherwise, the definition of the following terms used in these guidelines would be as below: –

(i). CENTRAL GOVERNMENT EMPLOYEES: An employee who is regular (i.e. an employee working on that post sanctioned by the Government in substantive capacity) and draws his emoluments from the Consolidated Fund of India.

(ii). TRANSFERABLE: An employee who has been transferred at least once in the preceding 7 years shall be deemed to be transferable.

(iv). AUTONOMOUS BODIES / PUBLIC SECTOR UNDERTAKINGS: Organizations which are fully financed by the government or where the government share is more than 51 per cent would be deemed to be autonomous bodies/ public sector undertakings.

(v). SINGLE GIRL CHILD: Single Girl Child means the only child i.e. only girl child to the parents, with no other siblings.

The students of State Boards/ICSE/NIOS may be considered for admission in class XI if vacancies exist.

A KV Student, who went abroad with his parents on their deputation to a foreign country, will be admitted to corresponding class on their return to India by the Principal of Kendriya Vidyalaya, where admission is being sought (such admissions will be over and above the class strength)

An advertisement for online registration to Class-I shall be issued by the Regional Office in the local newspapers for session 2020-21 in 1st week of May, giving the admission schedule (Annexure follows) and inviting Parents to register their wards for admission in Kendriya Vidyalayas. This advertisement should specifically indicate that admissions in Kendriya Vidyalayas are not restricted to Central Govt. employees and are open to all, only certain priorities have been laid down for different categories to regulate the admissions. The reservations for SC, ST, OBC-NCL and Differently Able under RTE Act 2009 should also be indicated.

(i) Registration shall not be done if there is no vacancy or likelihood of any vacancy in a particular class. In case a vacancy arises in future, registration can be made after giving wide publicity at local level/Vidyalaya website and admission can be granted as per KVS Admission Guidelines.

(ii) In case the number of children seeking registration is less because of which all seats have not been filled up, the Principal shall issue a second advertisement in the month June notifying the availability of vacancies.

(iv) Registration for class XI shall be taken up immediately after the declaration of results of class X and admissions up to the full strength of the class should be completed within 20 days after declaration of results by CBSE. In case there is any difficulty in admitting children up to the full strength because of the Executive Committee of the Vidyalaya not approving the same, the procedure as laid down for other classes above shall be followed and admissions up to the sanctioned strength of the class shall be made by 30th June with the approval of the Deputy Commissioner.

View: Details of the Admission Procedure From Class I and II to VIII and IX and XI in Kendriya Vidyalaya: KVS Admission Guidelines 2020

Loading...
Newer Post
Extension of EPF contribution 24% for another three months from June to August 2020: EPFO OM Dt 14 July 2020 approval
Older Post
Details of the Admission Procedure From Class I and II to VIII and IX and XI in Kendriya Vidyalaya: KVS Admission Guidelines 2020