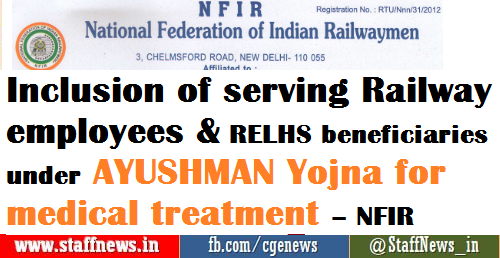 The Railway Board perhaps has taken decision arbitrarily to include all Railway Hospitals under AYUSHMAN Yojna after signing an MoU (jointly signed between the Ministry of AYUSH and the Railway Ministry) sometime last year, for treatment of outsiders at the rates fixed by CGHS.

While expressing its disappointment over the decision taken without consultations, NFIR conveys that with the existing infrastructure, staff and facilities available in the Railway Hospitals which are not adequate to cater to the requirement of serving Railway employees and RELHS beneficiaries, the Railway Administrations throughout the country have been forced to make arrangements with the Private Hospitals including Super-specialty Hospitals, to meet with the demands/needs. The decision of Railway Ministry to allow treatment of outsiders in the Railway Hospitals is therefore not prudent and needs to be reviewed besides holding detailed consultations with the Staff Federations.

Further to above, Federation desires to state that the decision of the Railway Ministry cannot be held as points mentioned below have not been covered:-

(ii) Although the Railway Administrations have been making payments to the empanelled Hospitals as per CGHS rates, the existing arrangement has been a matter of continuous complaints both from serving Railway employees and RELHS beneficiaries. Another point which cannot be ignored without consideration is, that the Central Government employees (and those retired) are eligible to avail medical treatment in the private Hospitals approved by CGHS without production of letter of referral although the terms and conditions for Central Government employees and Railway employees (serving and retired) remain the same.

(iii) It also needs to be considered that the limit in the medical treatment AYUSHMAN Yojna has been kept at Rupees Six Lakhs per annum, the holders of Medical Card (serving & retired) or UMID Cards whose annual income is Rupees Six Lakhs p.a. or below may be allowed automatically to avail medical facilities in all CGHS Hospitals and in the Hospitals approved by CGHS without production of referral letter from Railway authorities.

The above points are required to be considered in totality for mitigating the hardships being faced by the serving Railway employees and RELHS members and to avoid discrimination.

NFIR, therefore, requests the Railway Board to review the extant policy to enable serving employees and RELHS beneficiaries to avail medical facilities at CGHS Hospitals and also CGHS empanelled Hospitals without being referred by Railway Hospitals. 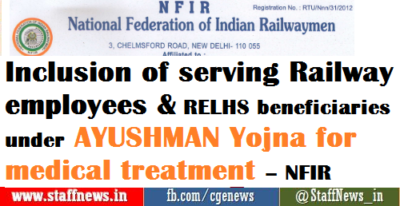