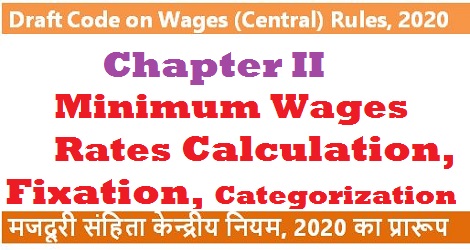 (Chapter of Draft Rules of Code on Wages (Central) Rules, 2020 published by Ministry of Labour and Employment Notification dated 07.07.2020)

Click to view: Chapter I & full Notification of Draft Rules of Code on Wages (Central) Rules, 2020 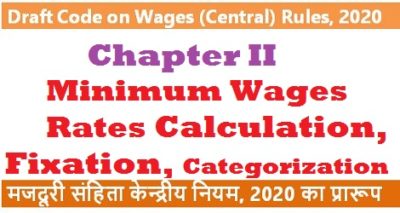 (I) the standard working class family which includes a spouse and two children apart from the earning worker; an equivalent of three adult consumption units;

(II) A net intake of 2700 calories per day per consumption unit;

(IV) Housing rent expenditure to constitute 10 per cent of food and clothing expenditure;

(V) Fuel, electricity and other miscellaneous items of expenditure to constitute 20 percent of minimum wage; and

* The provisions of the rule 3 are based on the criteria declared in the judgment in Workmen Represented by Secretary vs. Management of Reptakos Brett. And Co. Ltd. and Anr.,1992 AIR 504 pronounced by the Hon’ble Supreme Court and on the recommendations of the 15th Indian Labour Conference (ILC) to constitute 25 percent of minimum wage;

Extension of EPF contribution 24% for another three months from June to August 2020: Cabinet approval

4. Norms for fixation of minimum rate of wages.-

(1)While fixing the minimum rate of wages under section 6, the Central Government shall divide the concerned geographical area into three categories, that is to say the metropolitan area, non-metropolitan area and the rural area.

(ii) Joint Secretary to the Government of India in the Ministry of Labour and Employment dealing with the wages – Member;

(iii) A representative from the Ministry of Skill Development and Entrepreneurship,Government of India, dealing with skill development – Member;

(v) Two technical experts in wage determination as nominated by the Central Government -Members; and

(vi) the Deputy Secretary to the Government of India, in the Ministry of Labour & Employment, dealing with the wages – Member Secretary.

(3) The Central Government shall, on the advice of the technical committee referred to in sub-rule (2), categorize the occupations of the employees into four categories that is to say unskilled, semi-skilled, skilled and highly skilled by modifying, deleting or adding any entry in the categorization of such occupations specified in Schedule E.

(4) The technical committee referred in sub-rule (2) shall while advising the Central Government under sub-rule (3) take into account, to the possible extent, the national classification of occupation or national skills qualification frame work or other similar frame work for the time being formulated to identify occupations.

5. Time Interval for revision of dearness allowance.- Endeavor shall be made so that the cost of living allowance and the cash value of the concession in respect of essential commodities at concession rate shall be computed once before 1st April and then before1st October in every year to revise the dearness allowance payable to the employees on the minimum wages.

6. Number of hours of work which shall constitute a normal working day.—

(1)The normal working day under clause (a) of sub-section (1) of section 13 shall be comprised of eight hours of work and one or more intervals of rest which in total shall not exceed one hour.

(2) The working day of an employee shall be so arranged that inclusive of the intervals of rest, if any, it shall not spread over more than twelve hours on any day.

(3) The provisions of sub-rules (1) and (2) shall, in the case of an employee employed in agricultural employment, be subject to such modifications as may, from time to time, be determined by the Central Government.

7. Weekly day of rest.— (1) Subject to the provisions of this rule, an employee shall be allowed a day of rest every week (hereinafter referred to as “the rest day”) which shall ordinarily be Sunday, but the employer may fix any other day of the week as the rest day for any employee or class of employees:

Provided that an employee shall be entitled for the rest day under this sub-rule if he has worked under the same employer for a continuous period of not less than six days:

Provided further that the employee shall be informed of the day fixed as the rest day and of any subsequent change in the rest day before the change is effected, by display of a notice to that effect in the place of employment at the place specified by the Inspector-cum-Facilitator in this behalf.

Explanation.– For the purpose of computation of the continuous period of not less than six days specified in the first proviso to this sub-rule, any day on which an employee is required to attend for work but is given only an allowance for attendance and is not provided with work, a day on which an employee is laid off on payment of compensation under the Industrial Disputes Act, 1947 (14 of 1947),and any leave or holiday, with or without pay, granted by the employer to an employee in the period of six days immediately preceding the rest day, shall be deemed to be days on which the employee has worked.

(2) Any such employee shall not be required or allowed to work on the rest day unless he has or will have a substituted rest day for a whole day on one of the five days immediately before or after the rest day:

Provided that no substitution shall be made which will result in the employee working for more than ten days consecutively without a rest day for a whole day.

(4) An employee shall be granted–

(a) for rest day wages calculated at the rate applicable to the next preceding day; and

(b) where he works on the rest day and has been given a substituted rest day,

then, he shall be paid wages for the rest day on which he worked, at the overtime rate and wages for the substituted rest day at the rate applicable to the next preceding day:

(iii) the employee works on the rest day and has been given a substituted rest day, then, he shall be paid, only for the rest day on which he worked, an amount equal to the wages payable to him at the overtime rate;

and, if any dispute arises whether the daily rate of wages has been worked out in accordance with the provisions of this proviso, the Chief Labour Commissioner (Central) or the Deputy Chief Labour Commissioner (Central) having territorial jurisdiction may, on application made to him in this behalf, decide the same, after giving an opportunity to the parties concerned to make written representations.

Provided further that in case of an employee governed by a piece-rate system, the wages for the rest day, or the substituted rest day, as the case may be, shall be such as the Central Government may, from time to time determine having regard to the minimum rate of wages fixed under the Code, in respect of the employment.

(5) The provisions of this rule shall not operate to the prejudice of more favorable terms, if any, to which an employee may be, entitled under any other law or under the terms of any award, agreement or contract of service, and in such a case, the employee shall be entitled only to more favorable terms aforesaid.

Explanation.- For the purposes of this rule, ‘week’ shall mean a period of seven days beginning at midnight on Saturday night.

8. Night shifts.—Where an employee in an employment works on a shift which extends beyond midnight, then, –

(a) a rest day for the whole day for the purposes of rule 7 shall, in this case means a period of twenty- four consecutive hours beginning from the time when his shift ends; and

(b) the following day in such a case shall be deemed to be the period of twenty-four hours beginning from the time when such shift ends, and the hours after midnight during which such employee was engaged in work shall be counted towards the previous day.

9. The extent and conditions for the purposes of sub-section (2) of section 13.- In case of employees-

(a) engaged in any emergency which could not have been foreseen or prevented;

(b) engaged in work of the nature of preparatory or complementary work which must necessarily be carried on outside the limits laid down for the general working in the employment concerned;

(c) whose employment is essentially intermittent;

(d) engaged in any work which for technical reasons has to be completed before the duty is over; and

(e) engaged in a work which could not be carried on except at times dependent on the irregular action of natural forces;

the provisions of rules 6, 7 and 8 shall apply subject to the condition that –

(i) the spread over of the hours of work of the employee shall not exceed 16 hours in any day; and

(ii) the actual hours of work excluding the intervals of rest and the periods of inaction during which the employee may be on duty but is not called upon to display either physical activity or sustained attendance shall not exceed 9 hours in any day.