Number of Schools in India: State/UT wise total number of Government, Government-aided and private schools in the country

119. SHRI RAJIV PRATAP RUDY:
Will the Minister of EDUCATION be pleased to state:

(b) the total number of students enrolled in Government, Government-aided and private schools in the country, state/UT-wise;

(c) whether the Government has identified the need for new private school regulations in the country, especially in regulation of fee and admissions processes, and if so, details thereof; and

(d) whether the Government is aware of the high fees being charged by private schools for Nursery Class admissions and if so, steps being considered and taken thus far by the Union and State Governments to regulate this;

(e) the number of private, Government and Government-aided schools established during the last three years, State/UT-wise; and

(f) the steps taken to ensure compliance with respect to the reservation of the Economically Weaker Section by the Government?

(a): As per Unified District Information System for Education (UDISE+), 2018-19, the state-wise total number of Government, Government aided and private schools in the country is at Annexure-I.

(b): As per UDISE+ (2018-19), the total number of students enrolled in Government, Government aided and private schools in the country is at Annexure-II.

(c) &(d): To ensure compliance with essential quality standards, NEP 2020 institutes an effective quality self-regulation or accreditation system for all stages of education including pre-school education – private, public, and philanthropic. It further recommends setting up of an independent, State-wide, body called the State School Standards Authority (SSSA), States/UTs to ensure that certain minimal professional and quality standards (namely, safety, security, basic infrastructure, number of teachers across subjects and grades, financial probity, and sound processes of governance) are followed by all schools.

NEP 2020 further stipulates Public and private schools to be assessed and accredited on the same criteria, benchmarks, and processes, emphasizing online and offline public disclosure and transparency, so as to ensure that public-spirited private schools are encouraged and not stifled in any way. Also Private philanthropic efforts for quality education to be encouraged – thereby affirming the public-good nature of education – while protecting parents and communities from arbitrary increases in tuition fees. Public disclosure on the school website and on the SSSA website – for both public and private schools – would include (at the very least) information on the numbers of classrooms, students, and teachers, subjects taught, any fees, and overall student outcomes on standardized evaluations.

(e): As per UDISE+ (2018-19), the state-wise number of private, Government and Government- aided schools established during the last three years is at Annexure-III.

(f): The Right of Children to Free and Compulsory Education (RTE) Act, 2009, mandates the appropriate Government to provide free and compulsory elementary education to every child of the age 6 to 14 years in a neighbourhood school. Section 12(1)(c) of RTE Act, 2009 provides for admission of children belonging to weaker sections and disadvantaged groups in the schools specified in sub-clauses (iii) and (iv) of clause (n) of section 2 in Class I (or below) to the extent of at least 25 percent of the strength of that class.

For implementation of Section 12(1)(c) of the RTE Act, the respective State and UT Government which is the appropriate government under the RTE Act, is required to notify the disadvantaged groups and weaker sections, notify per child cost and start admissions in private un-aided schools as per the laid down procedure.

The Central Government is supporting States and UTs for re-imbursement of expenditure incurred towards payment made to private schools for admission of children under Section 12(1)(c) from 2014-15. Also, Ministry of Education, in various meetings like State Education Secretaries Conference, Regional/State workshops, Project Approval Board Meetings and through various advisories and communications has been advising/ guiding State/ UT Governments on proper implementation of Section 12 of the RTE Act, 2009. 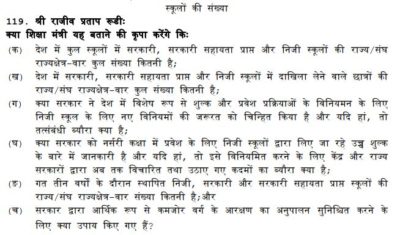