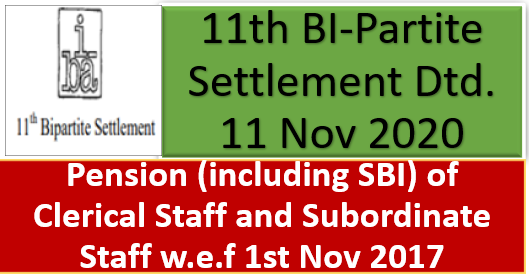 With effect from 1st November 2017, the Pay as defined under Clause 6 of this Settlement and drawn by the employees who are members of the Pension Fund shall be taken into consideration for the purpose of calculation of pension as per the Pension Fund Rules/ Regulations in force.

Employees in service of the Banks as on 1st November 2017 and who have retired thereafter but before the date of this Settlement and who had opted for commutation of pension will have an option not to claim incremental commutation on revised basic pension.

The pension payable to employees is based on the average of the emoluments drawn in the last ten months preceding the retirement of the employee in terms of Regulations 2 and 38 of the Pension Regulations. For the purpose of payment of pension, the Pay of the employees retiring on or after 1st November, 2017 will be taken on the basis of the Pay as is provided under this Settlement. However, in the case of employees who have retired from the services of the Banks, on or after 1st November, 2017 but before 31st August, 2018, since the period of preceding ten months will constitute Pay both under this Settlement as well as pertaining to Settlement dated 25th May, 2015, in such cases, the following procedure will be adopted for determining Pension payable to them.

With effect from 1st November, 2017, in respect of employees who retired or died while in service on or after 1st November, 2017, Dearness Relief shall be payable at 0.07 % per slab on the Basic Pension or Family Pension or Invalid Pension or compassionate allowance as the case may be. Dearness Relief in the above manner shall be paid half yearly for every rise or fall of 4 points over 6352 points in the quarterly average of the All India Consumer Price Index for industrial workers in the series 1960=100.

It is reiterated that – 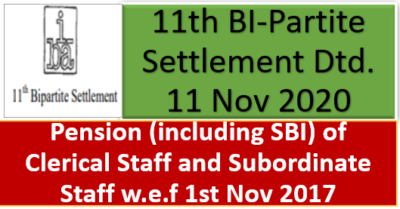