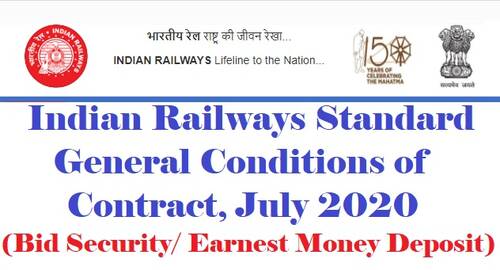 2. The above instructions are to be complied with by all concerned.

3. Accordingly, following changes have been made in the IREPS:

c. Incase Bid Security Declaration in lieu of Bid Security /Earnest Money Deposit is allowed against a tender, the provision has been made in IREPS for the bidder to mandatorily submit the following declaration along with his offer:

Bid Security Declaration: 1/We, M/s (Name of bidder) am/are aware that |/We have been exempted from submission of Bid Security/Earnest Money Deposit in lieu of this Bid Security Declaration. I/We understand and accept that if I/We withdraw my/our bid within bid validity period or if awarded the tender and on being called upon to submit the Performance Guarantee/Performance Security fail to submit the same within the stipulated time period mentioned in tender documents or on being called upon to sign the contract agreement fail to sign the same within stipulated period mentioned in tender documents, I/We i.e., the bidder shall be banned from submission of bids in any Works / Service Tender issued by Indian Railways for a period of 12 months from the date of such banning done on e-platform
IREPS.

e. Whenever a bidder is banned or banning is revoked, a system generated SMS as well as e-mail shall be sent to bidder. Full details related to banning will also be available to IREPS registered firms through their IREPS account.

6. Once the above system of taking Bid Security Declaration is in force, Tender Committee or in case of Direct Acceptance Direct Accepting Authorities — both for tenders invited on IREPS or otherwise — shall check up on IREPS whether the bidder is banned or not from bidding on the date of closing of tender. For the above purpose, search facility has been provided on IREPS.

7. If the bidder is banned for submission of bids on the date of closing of tender, such bid, even if received, shall be treated as invalid while evaluating the bids.

8. If a bidder is banned for submission of bids, on the request of bidder in writing to tender calling authority, ban can be revoked by the authority who had banned the bidder earlier, on submission to Railways by bidder (including Start-ups, 100% Govt. Owned PSUs & Labour Co-operatives) an amount equivalent to FULL Earnest Money Deposit that would have been worked out by Railways for that tender as per existing instructions on the date of inviting tenders if Earnest Money Deposit would have been taken in place of Bid Security Declaration while inviting tenders.

9. On receipt of request from bidder for revocation of ban on submission of bids, the authority who had banned the bidder from submission of bids, shall intimate in writing to bidder the amount the bidder has to deposit with Railways. Bidder in turn shall deposit the required amount in Railway earnings and submit the receipt for the same. The railway authority that had banned the bidder will upload (i) the bidder’s request, (ii) railway letter asking bidder to deposit required amount with railways and (iii) the receipt of the same, in IREPS and inform Department Admin through a letter to revoke the banning. The Department Admin will upload such letter and revoke the banning on IREPS.

12, Railways are advised to suitably modify their tender documents accordingly.

13. This issues with the concurrence of the Finance Directorate of the Ministry of Railways. 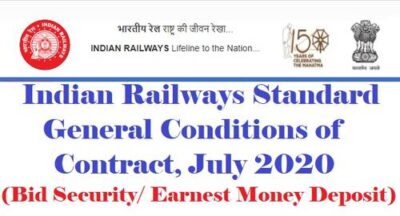