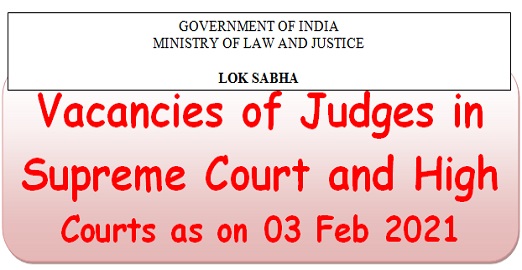 GOVERNMENT OF INDIA
MINISTRY OF LAW AND JUSTICE

Vacancies of Judges in Supreme Court and High Courts

Kalyan Banerjee Will the Minister of LAW AND JUSTICE be pleased to state:-

The MINISTER OF LAW AND JUSTICE, COMMUNICATIONS AND ELECTRONICS & INFORMATION TECHNOLOGY

Statement referred to in reply to parts (a) to (c) of Lok Sabha Starred Question No. 29 due for answer on 03.02.2021 regarding “Vacancies of Judges in Supreme Court and High Courts”

Filling up of vacancies in the High Courts is a continuous, integrated and collaborative process between the Executive and the Judiciary. It requires consultation and approval from various constitutional authorities both at state and central level. Hence, the time for filling up of vacancies of the Judges in the higher Judiciary cannot be indicated.

While every effort is made to fill up the existing vacancies expeditiously, vacancies of Judges in High Courts do keep on arising on account of retirement, resignation or elevation of Judges and also due to increase in the strength of Judges. During the period from May, 2014 to 2021 (till 1.2.2021), the details of appointment in the Supreme Court and the High Courts are as follows:-

Government is committed to filling up of vacancy expeditiously in time-bound manner.