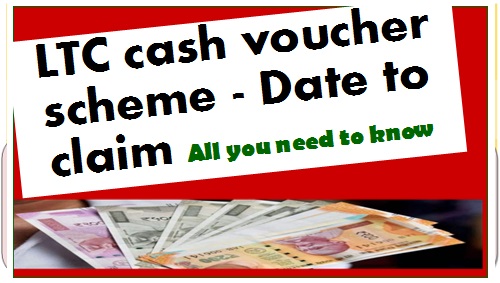 LTC cash voucher scheme – Date to claim – Under the scheme, the central government employees can claim cash equivalent of the LTC amount, comprising leave encashment and fare, through reimbursement if they opt for it.

The Centre in October last year announced the leave travel concession (LTC) cash voucher scheme to boost consumption which was affected due to the Covid-19 induced lockdown. The scheme allows government employees to claim tax benefits through the purchase of goods and services in lieu of LTC for travel.

Under the scheme, the central government employees can claim cash equivalent of the LTC amount, comprising leave encashment and fare, through reimbursement if they opt for it. The month end or March 31 is the last date to avail the benefits of the scheme.

Here’s all you need to know about how to avail the LTC cash voucher scheme:

> The cash equivalent benefit can be claimed if the employee spends a sum three times the value of deemed LTC fare.

> Cash equivalent of full leave encashment benefit can be claimed if the employee spends an equal sum. This will be counted towards the number of leave encashment on LTC available to employees.

> Invoices of goods and services availed with GST rate not less than 12 per cent can also be claimed under the scheme. The payment of the goods or services from the registered GST vendor is required to be done through digital mode.

> To avail for the package, an employee should opt for both leave encashment and LTC fare.

> Employees who have opted for the new tax regime can not avail the scheme, where the rate of taxes are lower but most deductions and exemptions are not applicable.

> Initially, the scheme was launched for government employees but was later extended to the private sector as well, reported Mint.

> According to the department of expenditure, the amount of up to 100 per cent leave encashment and 50 per cent value of the deemed fare is to be paid as an advance to the employee opting for the scheme and claims under the scheme is to be settled in the current financial year till March 31.