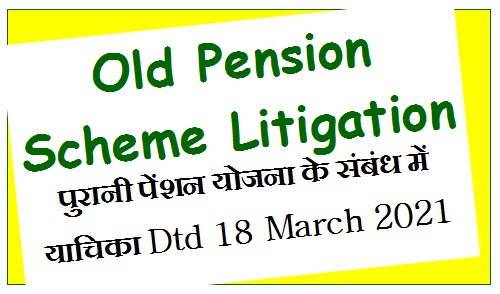 Will the PRIME MINISTER be pleased to refer to answer to Unstarred Question 428 given in the Rajya Sabha on 4th February, 2021 and state:

(a) whether High Court of Delhi on 15/01/2021 in W.P. (C) 8208/2020 and various other cases has ordered to revert officials under National Pension System (NPS) to Old Pension Scheme whose results for selection were declared after 31/12/2003 while advertisements for recruitment were issued before NPS coming into force;

(b) if so, the details thereof and action taken/proposed in this regard; and

(c) the rationale for not issuing general orders for all on above lines inspite of recent judgements of Apex/High Courts in similar cases and compelling own officials for undue litigation instead of attending office thereby causing wastage of public money?

(a) to (c): The new contributory pension scheme (now known as National Pension System) was introduced vide a notification dated 22.12.2003 issued by the Department of Economic Affairs.

As per this notification, the new system was mandatory for all new recruits to the Central Government from 1.1.2004.
The petitioners in the Writ Petition No. 8208 / 2020 and several other writ petitions filed in the High Court of Delhi were appointed to different posts in Central Armed Police Forces after their selection in June/July, 2004 pursuant to the advertisements issued in June, 2003 and September, 2003 and examinations conducted in January, 2004. The petitioners prayed for extension of the benefit of old pension scheme on the ground that the advertisements for the
posts were issued before 1.1.2004. In its common order dated 15.01.2021, Hon’ble High Court has allowed these Writ Petitions and has directed to extend the benefit of Old Pension Scheme to each of the Petitioners.

In view of the decisions of the Courts in some other cases and in order to redress the grievances of the employees who, on their selection before 1.1.2004, could join Government service only after 1.1.2004, instructions were issued by Department of Pension & Pensioners’ Welfare on 17.2.2020 that in all cases where results for recruitment were declared before 01.01.2004 against vacancies occurring on or before 31.12.2003, the candidates declared successful for recruitment would be eligible for coverage under the CCS(Pension) Rules, 1972.

The date of advertisement for the vacancies is, however, not considered relevant for determining the eligibility for coverage under the Old Pension Scheme, in terms of the Notification dated 22.12.2003 and O.M. dated 17.02.2020. It has, therefore, been decided to file a Special Leave Petition in the Hon’ble Supreme Court against the order dated 15.01.2021 of the Hon’ble High Court of Delhi in Writ Petition No. 8208/2020 and the other connected writ petitions.