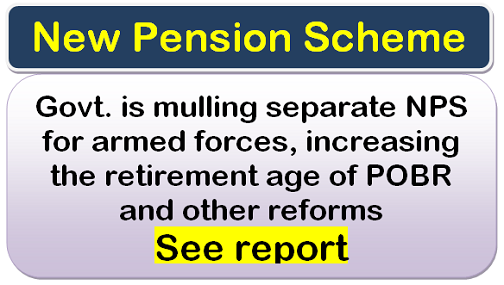 As per 15th Finance Commission Report the MoD has been examining various possibilities of reforms in defence pension, as deliberated by relevant Parliamentary Committee.  The extract of Para 11.66 is reproduced below:-

11.66 The MoD has been examining various possibilities of reforms in defence pension, as deliberated by relevant Parliamentary Committees. These are:

i. bringing service personnel currently under the old pension scheme into the New Pension Scheme (NPS) or a separate NPS for the armed forces;

ii. increasing the retirement age of personnel below officer ranks to a reasonable level;

iii. transfer of retired personnel to other services, like the paramilitary forces, after active service of a certain duration; and

We recommend that the MoD take appropriate reform measures, without losing much time, on these lines or any other innovative approach, in order to ensure the growth of defence pensions are at para with non-defence pensions.

Para 3.81 of 15th Finance Commission Report is stating about the Defence Expenditure