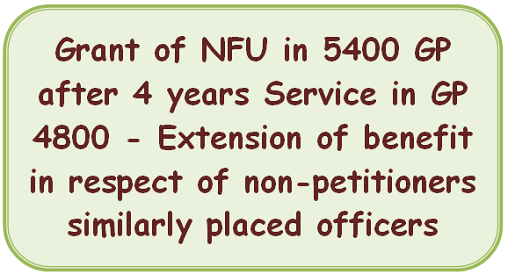 F.No.23011/67/2020-Ad.IIA
Government of India
Ministry of Finance
Department of Revenue
(Central Board of indirect Taxes & Customs)

Subject: Extension of benefit in respect of non-petitioners/ similarly placed officers with respect to order of Hon’ble Madras High Court elated 06.09.2010 in WP No. 13225/2010 – regarding

Please refer to your letter F.No./Coord./Expdt./MACP Clari/O 1120-211489 dated 11.02.2021 on the above cited subject matter wherein reference has been drawn towards Board letter No. A-23011/67/2020-Ad.IIA dated 24.09.2020 vide which it was corrununicated to the Chief Commissioner of CGST Meerut/ Lucknow Zone that the extension of benefit of M. Subramaniam case to non-Petitioner/ similarly placed officers arising out of judgment dated 06.09.2010 passed by the Hon’ble High Court of Madras in WP(C) No. 13225/2010 is being examined in consultation with Department of Expenditure.

2. Briefly, as per reco1mnendations of the 6th Central Pay Commission, Department of Expenditure vide Resolution No. 111/2008 IC dated 29.8.2008 has specified that the Group-B officers of Dia Revenue etc. will be granted grade pay of Rs. 5400/- in PB-2 on non-functional basis after 4 years of regular service in the grade pay of Rs. 4800/- in PB-2. On receipt of references from field formation of CBEC, the matter was examined in consultation with the Department of Expenditure and a clarification was issued vide this Department’s letter F. No. A- 260 17/98/2008-Ad.IIA dated 21/1112008 (copy enclosed) clarifying the position as to how the 4 years period is to be counted for the purpose of granting non-functional upgradation to group ‘B’ officers working under the field formations of CBEC. It was clarified that 4-year period is to be counted w.e.f. the date on which an officer is placed in the pay scale of Rs. 7500-1200 (pre­ revised). .Thus, if an officer has completed 4 years on 01.01.2006 or earlier, he will be given the non-functional upgradation w.e.f. 01.01.2006. If the officer completes 4 years on a date after 01.01.2006, he will be given non-functional upgradation from such date on which he completes 4 years in the pay scale of Rs. 7500-12000(pre-revised).

4. In this connection, it is also stated that Shri Subramaniam had filed the OA No 167/2009 before the Hon’ble CAT, Chennai Bench stating that he was entitled to grade pay of Rs. 5400 w.e.f. I .1.2008 after 4 years of service in the grade pay of Rs. 4800/-, granted under ACP Scheme, as per the orders of the Government of India accepting the recommendations of the 6t11 Pay Commission and requested to the Tribunal to direct the respondents to grant him consequential pay/financial benefits etc. The same was dismissed by the Hon’ble Tribunal vide order dated 19.04.2010. He made appeal before Hon’ble High Court of Madras against the order dated 19.04.2010 of the Tribunal in WP No. 13225 of 2010 which was allowed by the High Court vide order dated 06.09 .2010 in favour of Sh. M. Subramaniam. Further, the Civil Appeal No(s) 8883 of 20 11 filed by this Department against the order dated 19.04 .20 10 of the High Court was dismissed by the Hon’ble Supreme Court vide order dated 101h October, 20 17. Accordingly, this Department, in consultation with D/o Expenditure, decided to implement the Order dated 06.09.2010 of the Hon’ble High Court of Madras in case of Petitioners only.

5. Keeping in view the fact that Hundreds of CAT/Court cases are pending throughout India seeking benefit of M. Subramania m case, the matter of extending the benefit of Order dated 06.09.2010 of the Hon’ble High Court of Judicature at Madras in W.P. No. 13225 of 20 10 in the case of M. Subramaniam to all similarly placed officers has been examined in the Board. Department of Expenditure has not agreed to the proposal of the Department to extend the benefit of the said judgement to all similarly placed officers. However, the Court judgements which are passed by placing reliance on the M. Subramaniam case are forwarded to the Board for further directions in so far as implementation of such CAT/Court orders are concerned.

6. This issues with the approval of the Competent Authority.