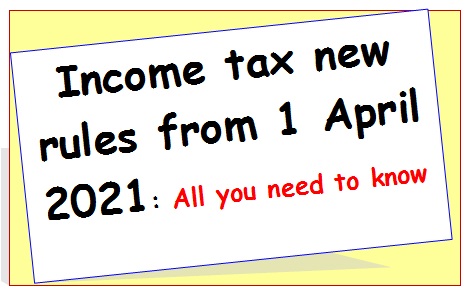 Income tax new rules from 1 April 2021: All you need to know

Income tax new rules from 1 April 2021: All you need to know So let's take a look at the changes announced in the Union Budget in February for income

Income tax new rules from 1 April 2021: All you need to know

So let’s take a look at the changes announced in the Union Budget in February for income tax which will come into effect from 1 April 2021. According to the new rules, senior citizens of the age 75 and above with income from pension and interest from fixed deposit in the same bank would be exempted from filing ITR from April 1

The new financial year begins on 1 April. Union Finance Minister Nirmala Sitharaman presenting Union Budget 2021 had announced a slew of changes in the income tax rules. These changes are set to come into effect from today, 1 April 2021. So let’s take a look at the changes announced in the Union Budget in February for income tax which will come into effect from tomorrow.

Let’s take a look at income tax changes that will come into effect from 1 April:

TDS: In order to make more people file income tax returns (ITR), the finance minister has proposed higher TDS (tax deducted at source) or TCS (tax collected at source) rates in budget 2021. The budget has proposed the insertion of new Sections 206AB and 206CCA in the Income Tax Act as a special provision for the deduction of higher rates of TDS and TCS, respectively for the non-filers of an income tax return. “The individuals who have not filed the income tax returns, however, have a TDS or TCS deduction of more than ₹50,000 in the last 2 years, will have to pay TDS or TCS subject to a minimum of 5%. Here the deductor will now become responsible for collecting the ITR proof from the individuals for compliance,” Archit Gupta, Founder and CEO of Cleartax said.

Option to choose ‘New tax regime’ instead of Old tax regime: The government had implemented the new tax regime last year in Budget 2020. “However, the exercise of choosing one of the tax regimes for FY 2020-21 will be required to be made starting from 1st of April 2021. Taxpayers still have time until 31st March 2021 to make tax-saving deductions, however, they will be able to opt for a beneficial regime at the time of filing their tax returns for FY 2020-21,” Archit added.

Pre-filled ITR forms: Individual taxpayers will be given pre-filled Income Tax Returns (ITR). In order to ease compliance for the taxpayer, details of salary income, tax payments, TDS, etc. already come pre-filled in income tax returns. To further ease filing of returns, details of capital gains from listed securities, dividend income, and interest from banks, post office, etc. will also be pre-filled. The move is aimed at easing the filing of returns.

LTC scheme: The central government in Budget 2021 has proposed to provide tax exemption to cash allowance in lieu of Leave Travel Concession (LTC). The scheme was announced by the government last year for individuals who were unable to claim their LTC tax benefit due to covid-related restrictions on travelling. This scheme is only available till 31st March 2021, i.e. money must be spent by this date to avail of the scheme.

Reimbursement of expenses on purchase of Hearing Aids – Revision of rate & guidelines: Railway Board Order

Ayub Mugal: Send me link form "IAFA-381" declaration of heairship on nomination or will or administration

Chintamani Subbarayappa Nagaraja: When unorganised sectors like small business mens are getting 5000/as monthly pension.where as we organised sector employees,who worked for the establishments and public services,and rendered their full services and retired and getting Rs 1000/pm where is justice

K Venugopal: EPFO 95 is not solved to revise enhanced pension to employees of private organisations. Supreme court is delayed this matter by nominating a team to go through the issue. They are sleeping. Pensioners are dying due to lack of money to eat and medical expenses to meet with the mere pension of ₹1000. If supreme court is really want to solve this matter? When previous hearing some six months before a justice directed the PF authorities and official to discuss daily and quickly conclude this issue. But now a committee formed. Now it has enough time like previous committees Sarkaria, Shaw committees. The person who gave the idea will face the curse of age old people, who deprived off hard earned money.

Missing Immovable Property Returns of IAS officers, if any, from 01.01.2011 onwards: Clarification by DoP&T

Promotions to Group ‘B’ posts on Indian Railways – Pattern, Syllabus, Schedule for LDCE through CBT

Review of cost of Housekeeping of Trains & Stations – Clarification