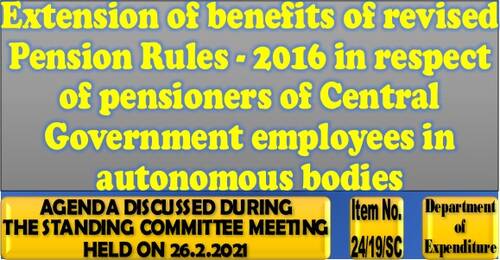 Subject: Extension of benefits of revised Pension Rules – 2016 in respect of pensioners of Central Government employees in autonomous bodies

Joint Secretary (Personnel): stated that Department of Expenditure has issued orders only for Central Government employees and not in respect of employees belonging to autonomous bodies. In case of Dearness Allowance , the orders are issued by administrative Ministries/ Departments.

Secretary (Staff Side) pointed out that the employees of autonomous bodies were getting pay scales of Central Government; the problem arose when the Department of Expenditure imposed the condition that 25% of the expenditure will be borne by the administrative Ministries/ Department. It is imperative that these Central Government employees in autonomous bodies should be kept on equal footing with Central Govt. employees for the purpose of pay scales and pension.

As mentioned by the Joint Secretary (Pers.), DoE in the meeting of the Standing Committee, the Staff Side may keep this demand as a separate issue.

Hence, this issue is required to be taken up by the Staff Side with the D/ o Expenditure in isolation.

Hence, this item may be taken away from the list of pending items of Standing Committee.

Discussions/Decision on 26.02.2021: It was decided that the matter may be discussed separately by the Staff Side with the Department of Expenditure.

Hence, the item may be treated as closed in so far as agenda for the meeting of Standing Committee is concerned. 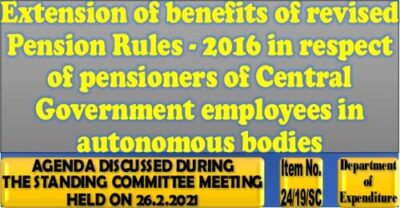 View: Final Minutes of the meeting of the Standing Committee of JCM held on 26.02.2021