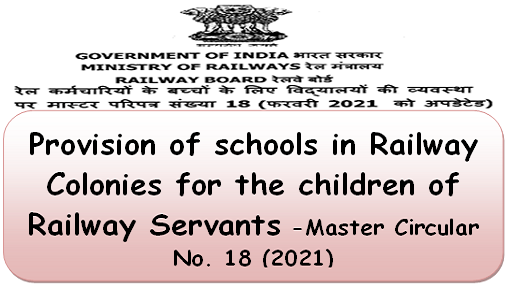 Subject: Provision of schools in Railway Colonies for the children of Railway Servants.

Reference Board’s letter No. E(W)90/SC-2/Master Circular dated 21.12.1990 and E(W)2000/SC2/MC/l 8 dated 31.05.2001. Since then, a number of instructions on this subject have been issued in the form of Supplementary Circulars to the main Master Circular. It has now been decided by the Ministry of Railways to consolidate these instructions and issue a revised and updated version of the Master Circular as under, for information and guidance of all concerned.

2.1 Educational facilities provided on the Railways owe their origin to the necessity for fulfilling the educational needs of the children of European and Anglo-Indian employees who, in the last century, formed a considerable proportion of the Railway servants posted at places where no European Schools were available. With this end in view, Railway schools were established at large Railway establishments. Certain Railways established boarding schools at hill stations for imparting education under European conditions. Other Railways assisted their employees by undertaking to pay a portion of the tuition fees. The educational facilities thus provided for Europeans were later ‘extended to Anglo Indians and when the number of educated Indians began to increase in Railway Services, the Railways began to provide• such facilities for the children of Indian Railways servants at places where adequate arrangements did not exist.

2.2 Under Article 246 – Item 25 of Concurrent List/List-III (Seventh Schedule), provision of educational facilities is primarily the responsibility of State Govt./Union Ministry of Human Resource Development (re-named as Ministry of Education). However, Railways have provided educational facilities to the limited extent within the constraint of available resources purely as a measure of staff welfare to meet the needs of wards/children of Railway servants only at such places where there is a concentration of Railway servants and the educational facilities provided thereat by other agencies viz. Central/State & private are found inadequate or are totally absent resulting in hardship or inconvenience to them.

2.3 Educational facilities provided by the Railways are generally confined to Primary/Middle/ High/Senior Secondary Standards. The Railways do not normally enter into the field of college and Technical education owing to their extant policy keeping in view the far reaching administrative and financial implications.

Several Railway Educational Institutions comprising a Degree College, Senior Secondary Schools, High Schools, Middle, Primary and ATP Schools are functioning on our system. In addition to this, Kendriya Vidyalayas (both under Civil and Project sector) and numerous private schools are also functioning on Railway land in order to cater to the needs of children of Railway servants. ,;

3.1 It may be reiterated that provision of educational facilities is primarily the responsibility of the State Govt./Union Ministry Education. It is admitted that difficulties in this respect were being experienced in the past by Railway servants but with the passage of time and considerable and extensive educational facilities being provided by different agencies, Government as well as private at various places, the demands for expansion/upgradation of schools •to the various levels/standards, should considerably reduce and finally cease to exist. Railway servants should, therefore, avail of the existing educational facilities which have been provided by the State Govt. etc. for the general public. To achieve this goal, the Board have also decided as a matter of policy to establish Kendriya Vidyalayas preferably in “Civil Sector” in Railway colonies which while meeting the needs of the employees, will also reduce our financial burden on the administration of the schools.
(Railway Board’s letter No. E(W)83/SC-2/27 dated 13.9.1988)

3.2 Keeping in view the existing facilities at various places where there is a concentration of Railway servants, constraint of funds, restrictions imposed on creation/upgradation of posts without matching su1Tender of live posts and imperative need to effect stringent economy in administrative expenditure etc., the Board desire that a critical review of Austerity Type Primary Schools should be undertaken by respective Railway Administrations and the feasibility of closure, amalgamation or conversion of such schools should be examined and a phased programme should be chalked out. Similar study/review should also be conducted in respect of other schools viz. Primary, Middle, High/Higher Secondary Schools on opening/expansion of non-Railway Schools and Kendriya Vidyalayas and efforts should be made to progressively close down the existing Railway schools matching the expansion of Keridriya Vidyalayas and other non-Railway schools.

3.3 With this end in view, the following points should be kept in view by the Railway Administrations while forwarding their proposals regarding upgradation/expansion of Railway Schools, introduction of new sections/classes/subjects etc. in the prescribed proforma to the Railway Board:-

(ii) No proposal for opening of new Railway school should be sent to the Board;

(iii) Efforts should continue to be made to obtain grant-in-aid from respective State Governments where Railway Schools are situated;

(iv) Proposals for expansion/upgradation, etc. of Railway Schools should be submitted to the Board for consideration only sparingly and where inescapable and fully justified taking into account the existing schooling facilities, etc. subject to the Railway Administration being able to muster suitable matching surrender of live posts equal to the cost of posts of teaching and non-teaching staff involved in the proposal; and

(v) On opening of Kendriya Vidyalayas in Railway colonies, the concerned Railway Administration should take immediate steps to close down the ATP Schools, if any, already functioning at the stations. Steps for closing down the higher classes/schools may be taken progressively with the expansion of the Kendriya Vidyalayas.

3.4 Proposals regarding opening of new sections/classes, introduction of new subjects, upgradation of schools etc. should be sent to the Board (with detailed estimate of recurring and non-recurring expenditure involved) duly vetted by the FA&CAO in presc1ibed proforma positively by December each year to enable the Board to consider the same on merit and accord their approval, if found feasible before the commencement of the academic session.
(Railway Board’s letter No. E(W)83/SC-2/27 dated 13.9.88)

Loading...
Newer Post
Scheme of Annual Awards to the Principals/ Headmasters/ Teachers/ Students – Railway Schools
Older Post
MACP to the employees, who have completed 10/20/30 years on the date of their retirement