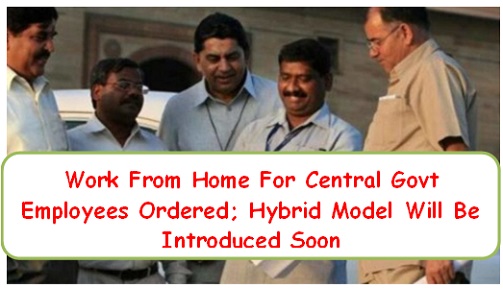 Work From Home For Central Govt Employees Ordered; Hybrid Model Will Be Introduced Soon As per the newest reports coming in some central government e

Covid 19 Outbreak: CPFC Directs to Ensure Credit of Pension to EPS Pensioners by 30th March, 2020
Interim Procedure Order on regularization of absence during COVID- 19 epidemic lockdown period: Railway Board Order Dt. 03 Sept 2020
Engagement of Medical Practitioners (CMPs) over and above the vacancy to contain the spread of COVID – 19 Pandemic.

As per the newest reports coming in some central government employees will now be made to work from home. The number of COVID-19 infected people is on the rise and this measure has been taken to deal with the same.

Read on to find out why the government employees will be asked to work from their homes henceforth.

Additionally, they have also been instructed to assess the attendance of employees in the ministries. Further, this attendance should also be limited so that the further spread of the dangerous disease is put to a stop.

And as secretaries review the attendance, some of the employees will be told to work from home

Initially, government departments had allowed 30% of staff on a rotation basis to rejoin the offices which soon turned into the entire workforce coming into the workplace in the past few months.

Existing Attendance System To Be Reassessed By Government Officials

Multiple ministries have also allowed their employees to work from home in case they ask for it on the basis of exposure or co-morbidity. The existing attendance system will be reassessed by government officials after the advice of the DoPT.

Attendance due to COVID-19: PCDA (CC) and the sub offices shall work at 50% strength in Office and 50% strength work from home

Last week, an Empowered Group of Ministers have re-examined the protocols for work from home that were implemented last year during the nationwide lockdown; however, a final decision has not yet been passed.

Last year in May, the DOPT had drafted a work from home protocol for Bureaucrats with Flexi timing schedules, handling of confidential documents, disposal of VVIP references, and also made sure that the confidentiality of the government communication in electronic mode has been preserved after consulting several ministries. This framework aimed at ensuring that there is no impact on the productivity if a great number of employees work from the safety of their homes

Loading...
Newer Post
New Pension scheme: On-boarding through Online PRAN Generation Module – PFRDA extend the timeline
Older Post
Revision in Pension of employees who retired on or after 01/11/2017 as per 11th Bipartite Settlement