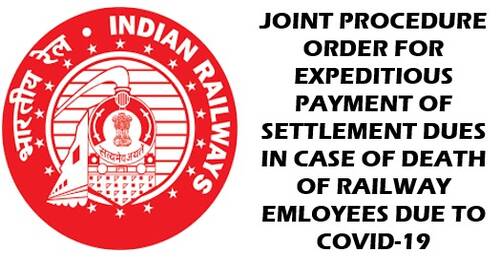 Settlement Forms to be filled by the retiring Railway servant: Order dated 14.07.2021

Settlement Forms to be filled by the retiring Railway servant: Order dated 14.07.2021

Sub : Settlement Forms to be filled by the retiring Railway servant.

Attention of the Zonal Railways/Production units is invited to Board’s letters of even number dated 12.11.2018 & 25.01.2019 on the above subject, vide which, a set of settlement forms to he filled in by the retiring railway employees was circulated.

2. With respect to these settlement forms, some concerns and hardships being faced by the retiring employee/family pensioner have been raised while shifting to HRMS and also by the Federation(AIRF). Therefore, it has been decided by the Board( MF, CRB & CEO) to keep in abeyance, the settlement forms issued vide letters dated 12.11.2018 & 25.01.2019, for a year and that the same may he reviewed after a lapse of one year.

3. In the meantime, the latest relevant forms as prescribed in the Railway Services (Pension) Rules, 1993 and in the subsequent instructions may be followed.

Loading...
Newer Post
Clarification on various points regarding service associations by DoPT and due attention to the issues raised by JCM members and representatives: MoD
Older Post
Revision of Channel of submission/level of Disposal of cases: Railway Board Order