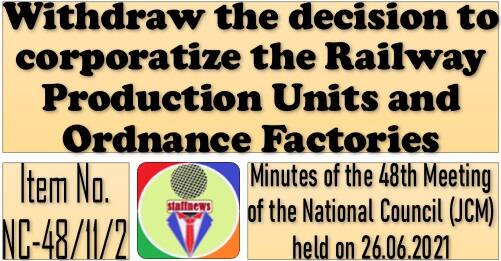 Withdraw the decision to corporatize the Railway Production Units and Ordnance Factories: 48th NC JCM Meeting Minutes of the 48th Meeting of the Na 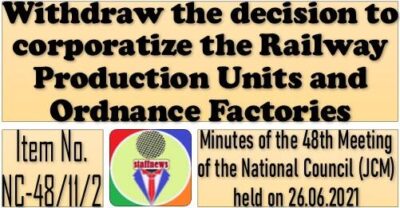 5.20 Item No. NC-48/11/2: Withdraw the decision to corporatize the Railway Production Units and Ordnance Factories

Leader, Staff Side stated that the corporatization of ordnance factories is causing resentment among the staff as corporatization is likely to bring privatization, which is not in national interest. He mentioned that the railway production units are doing outstanding work for which the employees need to be encouraged.

Secretary, Staff Side, stated that there are reservations about the corporatization. He stated that a letter has been written in this regard to Government with the request to resolve the issue in a transparent manner. He also mentioned that Railways are producing the cheapest and the best quality rolling stocks, may be locos, coaches and wagons. There is talk of corporatization which is not better.

Shri C. Srikumar, Staff Side, stated that three federations of the defence employees has sent a detailed representation to the Raksha Mantri, Secretary, Defence Production as also to Cabinet Secretary and Secretary (P). He also stated that the issue needs to be negotiated for settlement.

In response to Staff Side remarks, Chairman, Railway Board , stated that the steps taken by the Railways to corporatize their units were not causing hardships to the employees and that adequate measures are in place to safeguard the employees’ interest. Therefore, employees need not worry on this issue.

In his remarks on the subject, Chairman stated that while there is no doubt about the contribution of the employees in the production units of Railways and ordnance factories, decisions on policy matters like this lie in the domain of elected Government and they can be discussed in Parliament. Secretary, Staff Side requested that there should be separate meeting with Ministry of Railways and Ministry of Defence to resolve the issue amicably.

Decision:- Chairman stated that this item is not in the purview of the JCM.